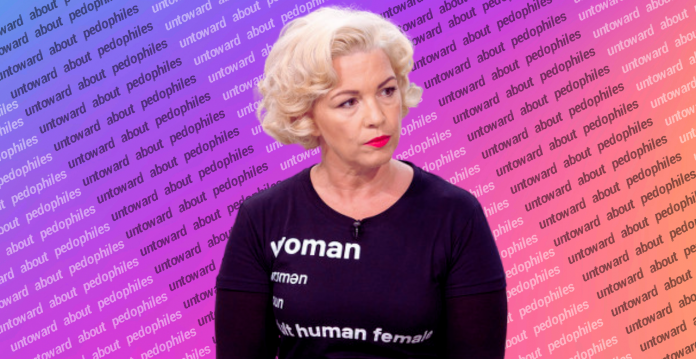 A British women’s rights activist has revealed that she was visited by law enforcement, and had a hate crime report filed against her, for being “untoward about pedophiles.” Kellie-Jay Keen-Minshull, also known by the moniker Posie Parker, posted a YouTube video on July 24 describing her exchange with Wiltshire Police officers.

In the video, Keen-Minshull stated that two young officers visited her home address, and one of the officers informed her that a formal complaint had been filed in response to comments she had made in one of the videos uploaded to her YouTube channel. She then inquired whether the officer had seen the video himself, to which he responded that he had not.

They advised Keen that the statements she made on YouTube were “untoward about pedophiles” and were being recorded as a “hate crime.” Keen-Minshull asked the officers if they meant a hate incident but they refused to clarify. Under UK law, hate incidents are recorded complaints that are not deemed criminal while hate crimes are punishable under the law.

Keen-Minshull suspected that the officers, who were from Wiltshire Police Department, were inexperienced. Wiltshire Police was recently found to be ‘inadequate’ in three areas and ‘requires improvement’ in the other five areas.

During her livestream, Keen-Minshull also reasserted her opposition to men claiming a female identity, as she suspected the person who reported her may have taken issue with this aspect of her activism.

“To the person who reported me… if you are a man who gets your rocks off wearing women’s clothing and you don’t care about the safety, dignity, or privacy of women and girls and you use women’s spaces, I’m going to say that you’re a predatory male. And if you want to be in those women’s spaces, where women are in a state of undress, I’m going to say that that particular fetish of yours is going to make you much more likely to be a pedophile,” Keen-Minshull said.

Keen-Minshull is well-known in the United Kingdom for her campaign Standing for Women, which focuses on an effort to ensure the language surrounding female issues is clearly articulated so that women’s sex-based rights are not eroded by gender ideology.

“You tell the man that reported me that I don’t care how he identifies, he is not welcome in women’s spaces… We won’t call them women, and they’re not going to take our language.”

Keen-Minshull reported that the officers also tried to obtain the identity of her teenager daughter during the visit. The visit to her home lasted approximately three minutes.

This is not the first time Keen-Minshull has experienced police reports related to her activism.

In 2018, she was brought in for questioning by the West Yorkshire police for tweets targeted at Susie Green, the CEO of the trans charity Mermaids. Keen-Minshull tweeted that Green had taken her 16 year old son to Thailand for sex reassignment surgery due to it having been illegal in the United Kingdom for minors, which she called “castration.”

Another tweet by Keen-Minshull that was reported to the police stated that Green had chemically castrated her son. Green had also taken her son to America for “puberty blockers” before they were legal in the UK. Green admitted that the use of puberty blockers made his later surgery more difficult and complex.

Keen-Minshull recounted on her Youtube channel that Green reported her to the police, who then approached Twitter to obtained her private information. The police informed her during the interview that Green felt her tweets were “threatening.” The police criticized her use of the phrase “castration” and claimed “sex reassignment surgery” does not include castration.

The police decided not to charge her following the interview. The police passed the case over to the Crown Prosecution Service who rejected it.

Trans activists have targeted Keen-Minshull and those who support her advocacy. Her organization Standing For Women travels around the UK hosting free speech events for women, allowing women to come to voice their views on issues affecting them. These events have been targeted by men arriving dressed in all black to intimidate women. As previously reported by Reduxx, one women was assaulted at a Speaker’s Corner event in May of this year.

Keen-Minshull herself has faced threats of violence. Most recently, a trans-identified male called into her YouTube show to tell her that he would celebrate her death. Some have speculated whether the individual who called in may be the same one who reported her to police.

Several women in the UK have been publicly persecuted for criticizing gender ideology in recent years.

In 2019, a mother was arrested in front of her children and held in police detention for 7 hours after being reported for ‘dead-naming’ a trans-identified male online. In addition to her arrest, Kate Scottow had her electronic devices seized and held by police for months after being released from custody.

In June, a woman was convicted on charges of sending an “offensive and obscene message” after a trans-identified male complained to police about her views.

Chinzia Ogilvie, 43, was sentenced at Portsmouth Magistrates’ Court on June 10 to community service and rehabilitation on hate-motivated charges related to a Twitter disagreement. Ogilvie was called in for questioning by police in January after engaging in an online debate with trans-identified male “Ivy” Burrows in October of 2021.