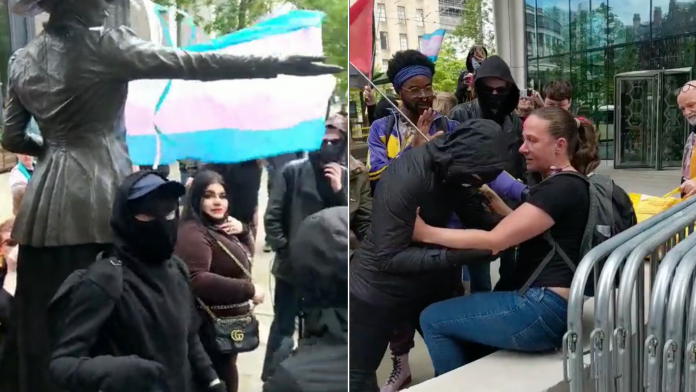 Footage from a feminist event in the U.K. is going viral today after a trans activist was caught on film physically assaulting a woman. The assailant was part of a black-clad gang preventing feminists from getting near a statue of suffragette Emmeline Pankhurst.

The organization sent a number of black-clad ‘security’ guards to vandalize the nearby statue of suffragette Emmeline Pankhurst, draping it in trans-colored ribbons and flags, and also prevented feminist activists from going near it.

At one point during the event, a lone feminist approached the statue, seemingly with the intention of placing a flag baring the colors of the suffragette movement near it. But footage taken shows the woman being physically handled by the trans activists, with a male roughly grabbing her.

In the footage, which has almost 100,000 views at the time of this writing, the woman is seen attempting to hold one particularly aggressive man back and force him to keep his distance.

The man grabs at her arms and chest, and even slaps her wrist as she tries to keep her arms outstretched and hold him back. Over 10 seconds into the interaction, and the black-clad male is encouraged to stop touching the woman by another trans activist.

Shortly after, Police liaisons are seen entering the concrete circle surrounding the statue, with one stopping to talk to the woman who had been assaulted, but nothing seemingly being done about the man who had grabbed and slapped at her.

In a statement provided to Reduxx, women’s rights advocate Kellie-Jay Keen slammed the actions of the black-clad activists, comparing them to a child having a tantrum.

“Entitled spoiled men cannot help but act entitled and spoiled,” she said, “Their toddler like tantrums are not so cute when they’re adults. They are intimidating, aggressive and violent.”

Keen is known for her campaign Standing for Women, which focuses on an effort to ensure the language surrounding female issues is clearly articulated so that women’s sex-based rights are not eroded by gender ideology.

On the activists who attacked the female demonstrator, Keen concluded: “Men like that cannot bear the burden of responsibility for their miserable lives so they blame women, and for some any woman will do.”

The antics of the activists caught the attention of Harry Potter author J.K. Rowling, who quote-retweeted another video showing footage of the black-clad ‘security’ refusing to allow podcast host Stephen Knight near the statue, which sits on public property.

Videos taken at the event have quickly gained widespread attention and backlash, with many noting the apparent irony of trans activists refusing to allow feminist demonstrators concerned about the status of women near a statue of a feminist advocate.

“I’m not sure I could ever forgive the people who advocate for this movement,” YouTuber @cbucksrules wrote on Twitter, “How do you think you’re on the right side of history when your people are anonymous and violent towards women?”

Others were incredulous that police did not intervene on the woman’s behalf.

“Police watch a woman being assaulted and then ignore the attacker in favor of having a stern word with the woman being attacked. Unbelievable.” Twitter user Andrew Dowd wrote in response to the video.

Another user noted that the scene bore striking resemblance to a photo depicting the statue’s likeness – Emmeline Pankhurst – being manhandled by police while demonstrating for women’s suffrage.

History repeating itself – Emmeline Pankhurst and her daughters endured the same. Deeds not Words! pic.twitter.com/RF1DvDlhfJ

Last year, France was a hotbed of anti-feminist violence, with Résistance Lesbienne and other French feminist groups reporting several events which were disrupted by trans activists.

In July 2021, footage was circulated by Get The L Out UK showing lesbian demonstrators being physically assaulted by trans activists during Paris Pride for protesting against males identifying into lesbianism. Months prior, women who gathered to demonstrate against the sex trade at a statue at Palace de Rèpublique were pelted with eggs and assaulted with red spray paint in their eyes.

Later, the statue where the incident had taken place was spray painted with words translating to “save a trans person, kill a TERF.”

In Spain, a corpse-like effigy of Spain’s then-Deputy Prime Minister Carmen Calvo was strung up from a tree in the  Plaza 8 de Marzo in Compostela, a reference to International Women’s Day and a warning ahead of the pro-woman events that would take place there.