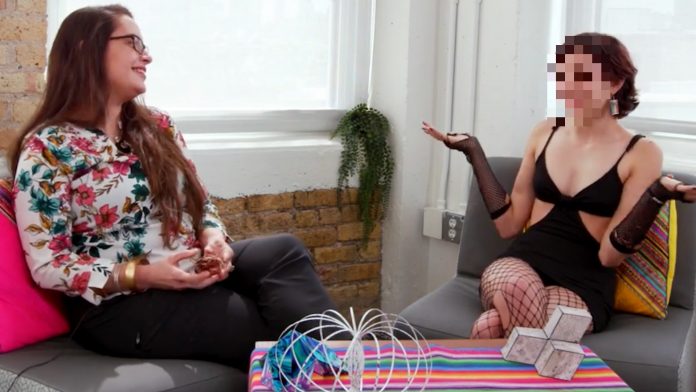 A video of a young trans-identified teenager is sparking controversy on social media for depicting a 13-year-old dressed in provocative, sexualized clothing as part of an official promotional video for the gender clinic at Chicago’s Lurie Children’s Hospital.

The child, identified as ‘Jupiter,’ uses they/them pronouns and can be seen speaking with a clinician named Natalia, who asks how adults, and parents in particular, can be more accepting of “gender diversity” and develop an “inclusive environment” for trans children.

“I think that one thing that should be explained to a lot of people is that you’re never too young to know about this kind of stuff,” Jupiter says, referring to gender identity.

“I feel like it’s something that people should be taught especially at a young age because it’s easier to learn that way, and that way it’s something you’ve always known.”

Netizens were quick to point out that the youth featured in the interview was wearing highly sexualized attire, with many expressing concern that the outfit would not be considered suitable for a 13-year-old. During the interview, Jupiter appeared to be wearing a black micro-dress with cut-outs at the waist, fishnet stockings, and fishnet gloves.

Others noted that the adult medical professional appeared to be constantly deferring to the child’s advice and recommendations on matters related to gender identity. During the course of the brief 4-minute conversation, Natalia repeatedly allows the 13-year-old Jupiter to guide her on terminology and explanations regarding “gender diverse” people.

Another video uploaded to the official Children’s Hospital of Chicago channel features a conversation on “gender fluidity” with a young woman who uses the name Bonsai and prefers “all pronouns.” Bonsai speaks with a man named Laurence, who is identified as a former student of the Chicago Public Schools system.

“With this gender fluid identity, within a day, you can easily experience three, four, or five different gender expressions … and that can end with people using different names or pronouns,” Laurence says.

Bonsai responds by claiming that “my gender changes from time to time,” and claims that her “identity had been very mixed up in high school.”

“I came out at first [and] thought I was a lesbian. Then, I went to [bisexual] … and then I started to question my identity. Who am I? I can’t explain it … and I’ve totally accepted it at this point,” Bonsai says.

Both interviews end with an acknowledgement of ‘special thanks’ to the Chicago Public Schools (CPS) system. CPS was criticized earlier this year after implementing a required teacher training program that declared sex a social construct and threatened punishment if faculty didn’t use students’ preferred pronouns.

The training program included a 104-slide PowerPoint presentation titled “Supporting Transgender, Nonbinary, and Gender Nonconforming Students,” which claimed that “everyone has multiple, overlapping identities” and that sex is a construct assigned at birth.

Another section of the presentation explicitly forbade teachers from informing parents about students who begin to claim that they are actually the opposite sex, declare a “gender identity,” or begin using different pronouns.

The videos, which are promotional resources for the Potocsnak Family Division of Adolescent and Young Adult Medicine, were created and published by the Ann & Robert H. Lurie Children’s Hospital of Chicago, which operates a clinic for “gender expansive or gender non-conforming children.” According to their website, Lurie Children’s Hospital consider “children and adolescents who exhibit behavior that is not typical of their assigned birth sex” as possible “patients” in need of medical intervention.

The hospital also receives substantial funding from members of the Pritzker family.

The Pritzkers are one of the wealthiest families in the United States, with an approximate net worth of $15 billion.

Jay Robert “JB” Pritzker is the current governor of Illinois and the richest politician in the United States. Penny Prtizker served as U.S. Commerce Secretary under President Obama from 2013 to early 2017. Jennifer Pritzker, born James Pritzker, is a trans-identified male who has donated millions to advance “transgender studies.”

Feminist researcher Jennifer Bilek has written extensively about the connections between the wealthy family, heirs to the Hyatt hotel fortune, and the vast sums of money they have invested in “[normalizing] the idea that human reproductive sex exists on a spectrum.”

According to Bilek, trans-identified Jennifer Pritzker established the Tawani Foundation, which has provided significant financial donations to Howard Brown Health and Rush Memorial Medical Center in Chicago, the University of Arkansas for Medical Sciences Foundation Fund, and the University of Minnesota’s Institute for Sexual and Gender Health, all of which provide some version of “gender care.” In the case of the latter, “clients” include “gender creative children as well as transgender and gender non-conforming adolescents.”