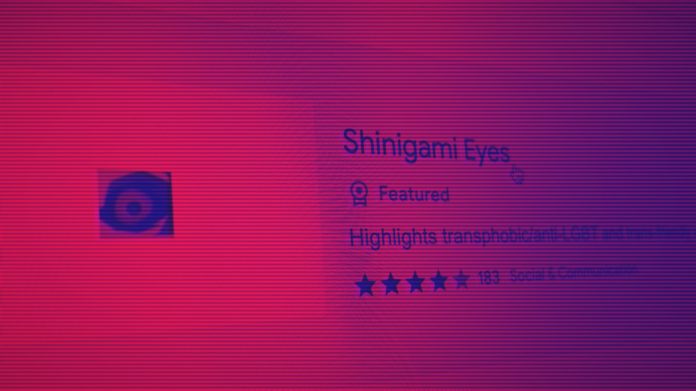 A browser extension designed by an alleged rapist to target social media users who express “transphobic” or “anti-LGBT” views has been banned in Norway, thanks in part to the effort of a feminist advocacy group.

Shinigami Eyes was created to mark users across Facebook, Twitter, Reddit, Tumblr, and more as “trans-friendly” or “anti-trans” by color-coding their accounts in red or green after users are recorded for their views without their knowledge or consent. The creator has previously admitted that the vast majority of those coded red are women. Notable “marked” people include tennis star Martina Navratilova, Harry Potter author JK Rowling, and British journalist Julie Bindel. According to some users of the extension, the entirety of popular UK parenting forum Mumsnet is ‘marked’ red.

Last year, the browser extension came under fire by a number individuals and organizations due to perceived data privacy and safety concerns. Among those who petitioned for the extension’s ban, Electronic Frontier Norway and Women’s Declaration International (WDI) Norway filed reports about the extension to The Norwegian Data Protection Authority (Datatilsynet).

In December 2021, Bjørn Erik Thon, Director-General of Datailsynet, moved to issue advanced notice that the extension would likely be banned in the country.

“We believe that [Shinigami Eyes] has no legal basis for the processing of personal data, and we therefore intend to impose a ban on the browser extension in Norway,” he said, adding that Shinigami Eyes jeopardized people’s freedom of speech.

“A practice where individuals are profiled and highlighted as trans-friendly or transphobic based on subjective assessments will have unfortunate consequences for the freedom of expression on the internet,” Thon stated.

On June 14, the authority issued a final decision that the extension was in breach of the European Union’s General Data Protection Regulation 2018 (GDPR). Under this legislation, it is illegal for organizations to unnecessarily collect and process data from EU citizens.

WDI Norway was first to announce the news on their Twitter.

The browser extension takes its name from popular Japanese animation Death Note. In the anime “having the shinigami eyes” means being able to see people’s names and the time they have left to live just by looking at them.

The extension was created by Laurelai Bailey, born Wesley, an American trans-identified male. Bailey identifies as a “trans sex worker” and was previously in the U.S. armed forces prior to coming out as transgender.

In 2015, an individual came forward to state that Bailey had committed sexual assault. Bailey faked his suicide shortly after, blaming an alleged victim for his actions in the process. Since then, Bailey has been accused by multiple other individuals of rape and molestation and was described by one victim as a “sexual predator.” The year prior to the explosion of allegations, Bailey reportedly sent child sexual abuse material to a journalist he disliked in an effort to have them investigated by police.

Bailey is known for expressing violent sentiment towards women online during the time he frequented social media, calling for trans activists to work to have ‘TERFs’ fired and run out of their homes.

“Perhaps if trans women smacked you in the face with a baseball bat every time you said some ignorant hateful s**t, you would learn,” Bailey threatened on Twitter.

In addition to creating Shinigami Eyes, Bailey once collaborated with Allison Woolbert, born Dennis, on a similar project known as TERF Tracker. Woolbert is a trans-identified male who was the executive director of the Transgender Human Rights Institute (THRI) until it was revealed that he had been convicted of raping a child in 1991.

Responding to the news of the extension’s ban, WDI Norway said they were pleased with the outcome of their efforts and decision from Datatilsynet, but had some overall reservations about the state of women’s rights in the nation.

“We are happy this obviously illegal technology has been banned in Norway. We are, however, still concerned that the authorities are still trying to ignore the risks trans activism pose against women and girls,” a spokesperson said.

As previously reported by Reduxx, Norwegian feminist Christina Ellingsen recently revealed she was under investigation by police for “hateful” tweets in which she stated males could not be lesbians or mothers. As a result of Norway introducing gender identity into the hate crime legislation in January 2021, Ellingsen could face up to three years in prison if found guilty.

Referring to this case, WDI Norge stated: “Woman run the risk of jail for saying ‘men can’t be mothers.’ Men who claim to be women in Norway are afforded a level of protection that the sex-class they are imitating do not have.”

“Trans activism is an aggressive, pseudo-scientific and misogynist ideology which enables men to abuse sympathy and to get a free pass for their hatred against women,” the WDI spokesperson continued, still noting that they took issue with Datatilsynet stating that Shinigami Eyes may have had a legitimate use.

“There is a willingness to give men who claim to be women leniency when caught doing something clearly illegal with the explicit purpose of ruining women’s lives.”