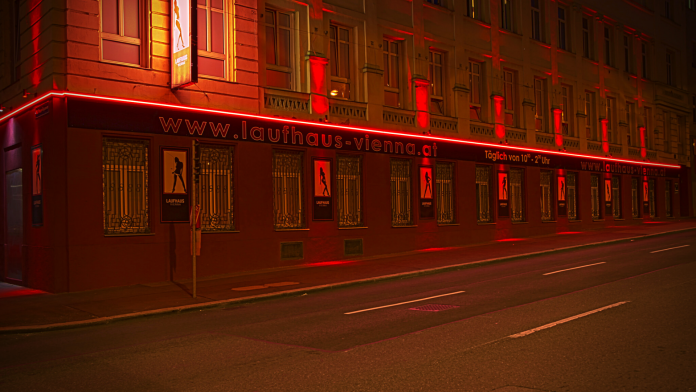 A brothel in Austria claiming to be on a humanitarian mission is allegedly offering housing for up to 90 Ukrainian refugees fleeing the conflict.

Laufhaus Rachel, a brothel in Vienna, is offering the city accommodations for the incoming Ukrainian refugees, but reports have specified the housing would be specifically for women and children.

According to local coverage, brothel owner Peter Laskaris claimed to have contacted the City of Vienna and the Red Cross with respect to his offer in March, and had anticipated revisions to the rooms in time for the first families to move in around the week of March 25.

“We just have to swap the red lights for the white ones,” Laskaris told Kronen Zeitung news, noting that the rooms all have bathrooms and satellite TV.

But other sources indicate the brothel rooms also come affixed with inappropriate additions such as Kleenex dispensers bolted to the headboards of the beds, posters and wallpaper featuring naked women, and other permanent furniture geared towards sexual use.

Some Austrian outlets expressed distaste over the offer, but even those that did took space to note that it was “not about degrading sex workers for their place of employment,” and cautioned people from conflating “human trafficking from self-chosen and self-determined sex work.”

Laufhaus Rachel’s website prominently boasts that it features women from “28 different countries” for clients to choose from. It also offers sex dolls for purchase or rent, a few of which have petit frames and youth-like faces.

Brothel boss Laskaris, who is known in Austria as the “Red Light King,” is no stranger to publicity stunts under the guise of good intentions.

In November of last year, another one of Laskaris’ brothels came under international scrutiny after offering men access to the women inside in exchange for a COVID-19 vaccine.

Funpalast offered men who got the vaccine at their in-house clinic a voucher for entry to its sexual ‘sauna club,’ with some sources reporting they had also given them a free 30 minute session with the “lady of their choice.”

At the time, the Laskaris stated the effort was an economic strategy in response to reduced clientele due to low vaccination rates. Boys as young as 14 years old were also allowed to visit the brothel’s clinic if accompanied by an adult.

While Laskaris issued multiple announcements on his war refugee housing effort, few details are available on whether or not the operations are in full-swing yet.

Reduxx reached out to the City of Vienna for more information on the project, including whether Lasakis was receiving any financial support from the City in line with its effort to support refugees, but did not receive a response. Laufhaus Rachel similarly did not respond to requests for comment.

The sexual exploitation of vulnerable Ukrainian women has been put under the spotlight since the years-long conflict in their home country came to a head at the end of February.

The surge in fetishization of Ukrainian women has continued in nations like Ireland, where some escort sites have reported a 250% increase in men seeking women of Ukrainian origin.

Last month in Germany, a transgender-run “sex work” organization was slammed for soliciting Ukrainian women who might be interested in entering the country’s legal sex trade.

Speaking to Reduxx in a recent interview, anti-sex trade advocate Elly Arrow noted that there had been an uptick in German men similarly discussing the impact of the Ukrainian conflict on the prostitution market, with many excited about the prospect of prices coming down as a result of the influx of potential vulnerable entrants to the sex trade.