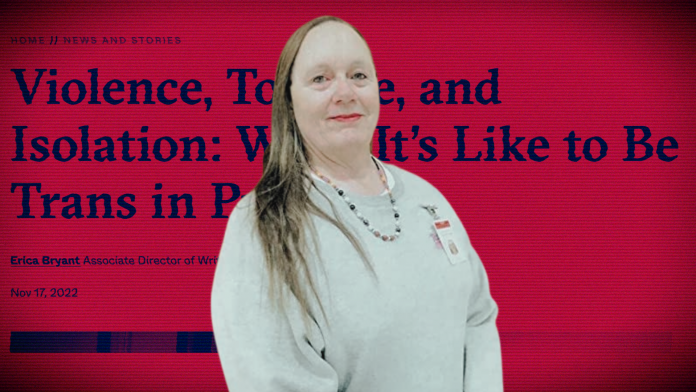 Content Warning: This article contains graphic details of crimes committed against two children and a person with a disability. Reader discretion is appreciated.

One of the top criminal justice organizations in the United States has featured a rapist and murderer in a Transgender Day of Remembrance article denouncing the treatment of transgender inmates.

On September 17, The Vera Institute of Justice released an article titled “Violence, Torture, and Isolation: What It’s Like to be Trans in Prison.” The Vera Institute is one of the largest criminal justice reform think tanks in the United States, and recently received a $171 million contract from the federal government to provide legal services to unaccompanied migrant children.

The article paints a bleak picture of the life of trans-identified inmates in prison, specifically “trans women” who are housed in men’s facilities, and also serves as an announcement for an upcoming report the Vera Institute is publishing on trans inmates and their experiences with the criminal justice system.

“The brutal, inhumane prison system across the United States does immeasurable harm to all who are forced to interact with it, but trans people suffer acutely as the result of unchecked physical and sexual violence and frequent denial of gender-affirming mental and physical health care,” the Vera Institute writes, going on to assert that “overuse of incarceration” is a key issue for trans-identified inmates.

As part of the piece, the Vera Institute offers comment from Patricia Trimble — a trans-identified male inmate currently serving a 50-year sentence for two heinous crimes, including the rape of two 9-year-old girls.

In the article, Trimble, who is described as a prison rights activist, recalls the suicide of a pseudonymous trans-identified inmate he was friends with, and argues that a lack of access to gender affirming care and housing was responsible for his death.

“Without access to programs and counseling, our community is doomed, thought of as nothing more than acceptable casualties,” Trimble is quoted as saying.

No where in the article does the Vera Institute mention the horrific crimes Trimble has been convicted of.

Born Patrick, Trimble was first convicted in 1978 of the brutal rape of two 9-year-old girls in the city of St. Charles, Missouri. Trimble kidnapped the children by tying rope around their wrists and dragging them to his car. The girls were then taken to a remote, wooded area where Trimble proceeded to orally and vaginally rape them.

But while in prison awaiting the final verdict on his case, Trimble would commit another heinous crime, making what the court would later describe as a “slave” out of his developmentally disabled cellmate and subjecting him to weeks of torture, rape, and abuse before murdering him.

Jerry James Everett, who was in jail awaiting trial for non-violent vehicular theft, was Trimble’s cellmate.

Trimble prostituted Everett to other inmates, and even offered to sell him to a member of the prison staff for a carton of cigarettes. Trimble tortured Everett, making deep gashes in his flesh using burnt shampoo bottles, and lighting matches that were placed between his toes. Trimble also forced Everett to play games he did not have the intellectual capacity to understand, and would “win” his food from him after inevitably beating Everett in the game.

A few weeks after beginning the sadistic abuse, Trimble advised other inmates he was planning on murdering Everett to prevent him from ever informing anyone outside of the prison of what had happened. He also stated that he was worried about being sent to prison if convicted solely of raping the two young girls, and wanted to “catch something much bigger” by committing a murder.

Trimble ultimately murdered Everett, staging it to be a suicide. He forced Everett to pen a goodbye letter before strangling him to death with towels — using such force the man’s neck was fractured. After Everett was dead, Trimble used the towels to hang his corpse so as to look like he had taken his own life.

The court noted that Everett was “mentally slow, and may never have fully comprehended what was happening to him.”

In 1980, Trimble was sentenced to death for his crimes — but, in 1985, the decision was commuted to a life sentence without the possibility of parole for 50 years. He is currently incarcerated in a men’s maximum security prison in Missouri.

According to the November 17 Vera Institute article, Trimble is now working with the Black and Pink project — an advocacy organization focused on prison abolitionism. Black and Pink is currently partnered with the Vera Institute to produce the report on trans-identified people and the criminal justice system.

Despite currently being in prison, Trimble is an active trans rights activist and semi-regularly updates his Medium blog.

In July, Trimble penned a blogpost titled “I am a Woman,” in which he outlines his realization of his transgender identity. The post begins by Trimble blaming his lack of gender affirmation throughout his life on the crimes he committed.

As previously reported by Reduxx, Trimble is a contributor to the Prison Journalism Project (PJP), a non-profit organization that claims its aim is to empower “incarcerated journalists” by providing them a platform. In July, Trimble penned at article for PJP on about preparing a presentation for a class at Missouri University after having been contacted by a Professor of Criminology there.

In 2021, Razvan Sibii, a senior lecturer in journalism at the University of Massachusetts, Amherst, praised Trimble for his “advocacy for, and mentoring of, LGBTQ people in prison.” That mentoring, which includes helping other trans-identified males gain access to benefits after declaring a transgender identity, had allegedly earned Trimble the nickname “Mother.”

Trimble currently has a book for sale on Amazon titled “Finding Purpose: One Transgender Woman’s Journey.” In his Amazon author profile, Trimble is described as a “feminist, activist, and advocate for the incarcerated LGBTQ+ community,” and claims he was wrongly convicted for the crimes he is currently incarcerated for.

Since the publication of our initial article on Trimble in July, Reduxx has been contacted by a number of readers who have reported that their Amazon accounts have been limited or suspended after leaving complaints about Trimble’s book on the Amazon listing.