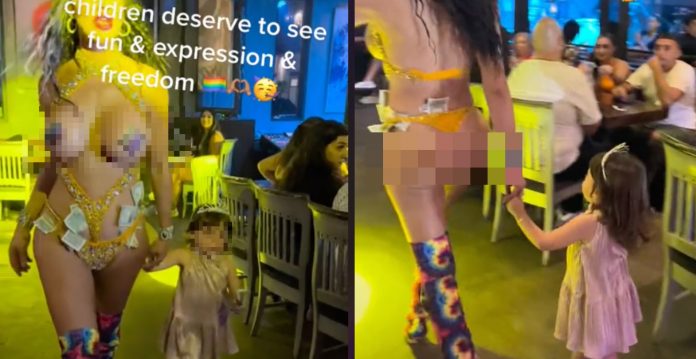 Florida Governor Ron DeSantis has filed a complaint against R House Wynwood, the Miami LBGTQ club after a TikTok which showed a toddler being led around by a semi-nude transgender Drag Queen during an event there went viral earlier this month.

The complaint, filed on Tuesday through the Florida Department of Business and Professional Regulation, states that the club’s weekend Drag Show Brunch events expose minors to sexually explicit and otherwise inappropriate content. The news was first broken via an exclusive on Brietbart, a conservative media outlet.

“The nature of the performances described above, particularly when conducted in the presence of young children, corrupts the public morals and outrages the sense of public decency,” the complaint says.

R House Wynwood is a Latin bar and club in Miami catering to the LGBTQ community. On its website, the multi-purpose venue advertises hosting a ‘Drag Extravaganza‘ on Friday, Saturday, and Sunday evenings. Last year, Secret Miami ranked R House #1 on a list of “Fabulous LGBTQ Bars To Check Out In Miami.”

On June 2, popular YouTuber Lauren Chen posted a TikTok she had found to her Twitter, writing: “These people belong in jail. This is a hill I’m willing to die on.”

The disturbing footage appeared to show a girl aged 3 to 5 being led by a provocatively dressed transgender drag queen. The drag queen only had nipple pasties covering his breast implants, and money stuffed into the skimpy g-string of his outfit.

The girl was being held by the hand as the drag queen strut through a restaurant area, and se is seen continuously looking up at the man’s exposed body. The child also appeared to also be clutching a few dollar bills in her free hand, indicating she had been collecting money from the spectators.

Overlayed onto the video was the text: “Children belong at drag shows!!!! Children deserve to see fun & expression & freedom!”

The source of the video posted by Chen was TikTok by user Nonie Kalra, who uploaded the original to her account just hours before Chen called attention to it. Kalra had tagged R House Wynwood in the upload, revealing where the incident had taken place. The video has since been removed.

DeSantis filed the state complaint in direct response to the viral TikTok, and R House Wynwood has 21 days to respond or it risks losing its liquor license, a move which would likely spell the end for its business in the Miami retail hotspot.

In preparation for the complaint’s filing, the Florida Department of Business and Professional Regulation’s Division of Alcohol and Tobacco sent investigators to R House Wynwood to inspect the conduct during multiple Drag Queen events on July 9, July 17 and July 23. During at least two of the visits, investigators describe that children were present and exposed to inappropriate conduct.

Investigators looked through the establishment’s social media pages, and found pictures and videos of multiple children involved in past events with the venue’s drag queens performing in sexually suggestive ways.

The complaint outlines the discovery of a recording made at one of the brunches in which a child “no more than 10” was exposed to a dancer gyrating in front of her while wearing a skin-tight outfit with suggestive cut-outs. The recording was uploaded to YouTube on September 14, 2021.

They also noted that the “Drag Brunch” included a specialty menu specifically targeted at minors under the age of 12.

At a Press Conference in Tampa held today, DeSantis says what occurred at the venue was “not consistent with our law and policy in the state of Florida,” adding that it was part of “a disturbing trend in our society to try to sexualize” youth.

DeSantis continued: “[This] is not the way you look out for our children, you protect children, you do not expose them to things that are inappropriate.”

“If this was a woman exotic dancer, I guarantee kids would not be allowed in there.” Pushaw said, “But because it’s a male who identifies as a woman, somehow it’s cool and should be marketed to children!”

But Pushaw emphasized that that Florida “does not have that double standard,” and asserted that children should never be involved in any adult entertainment whatsoever.

On June 24, a Pennsylvania-based drag queen with a history of performing in front of children was charged with 25 counts of the possession and distribution of child sexual exploitation material following a 2-year long investigation by law enforcement officials.

Earlier in June, a video of ‘drag queens’ performing provocatively for an audience of children at a gay bar in Texas went viral on Twitter, prompting massive backlash and raising concerns about child safeguarding. The children were seated in front of a sign which read “It’s Not Gonna Lick Itself” as they watched drag queens perform, tipping the adults in cash.

UPDATE 7/27/22: Comments from Christina Pushaw, the Press Secretary to Governor DeSantis, as well as additional details from the complaint, were added in post.