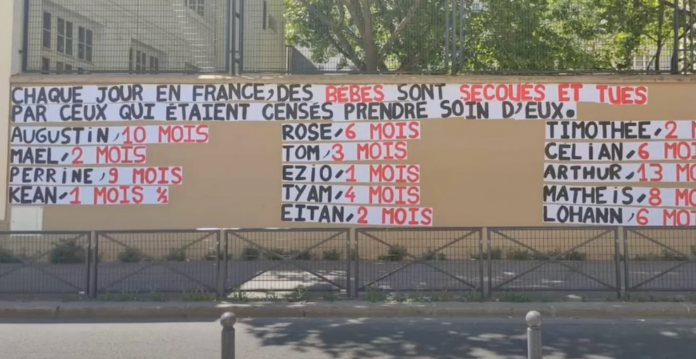 Feminists are expressing outrage after a mural created in remembrance of the infant victims of shaken baby syndrome was destroyed by trans activists.

On July 14, pictures began circulating on Twitter showing street art dedicated to babies lost to abusive head trauma — also known as “shaken baby syndrome” (SBS) — that had been intentionally defaced. The mural was paper-based art plastered near a sidewalk creating a collage with the names and ages of 14 babies who had died as a result of the injury. Most of the infants were aged 1 to 13 months.

Above the children’s names and ages, the mural also read: “Every day in France, babies are shaken and killed by those who were supposed to take care of them.”

According to the Mayo Clinic, shaken baby syndrome is a form of child abuse that “destroys a child’s brain cells and prevents his or her brain from getting enough oxygen.”

The mural had been created on July 10 for a documentary on SBS and was made in affiliation with French feminist group L’Amazone.

On July 14, the director of the upcoming SBS documentary released a short YouTube video expressing “grief and anger” at what had happened to the collage. Anne, an activist affiliated with the Collective to Abolish Pornography and Prostitution (CAPP) explains that she had interviewed three women whose babies had passed away after experiencing brain trauma due to being shaken by male partners, and that the women had sought the assistance of L’Amazone to create the memorial mural.

“The collage was trashed. Literally trashed,” she says, noting that her camerawoman lived close to the mural, and had caught a male and female destroying the memorial on the night of July 13. “She didn’t [shy away], she went to go and ask them why they were destroying a memorial to the [deceased] babies.”

The director then states that her camerawoman was told by the vandals that the collage was created by “transphobic feminists.”

“They didn’t care that this memorial was for the grieving mothers. They don’t care about the memory of those babies who died in excruciating pain … they just ransacked it.”

L’Amazone is known for creating street art in support of various feminist causes and often organizes protests and demonstrations across France on issues related to sex trade abolition domestic violence.

While the collage had nothing to do with trans-related issues, feminists believe it was targeted simply due to the fact L’Amazone was involved in its creation, with the group advocating for women’s sex based rights and often coming into conflict with trans activists as a result.

In 2021, members of L’Amazone were attacked by pro-“sex work” and trans activists while demonstrating against the sex trade at the Place de la République in Paris. Antifa and various other groups reportedly turned up in counter-protest, and began screaming slurs at the women, calling them “whores” and “sluts.” The feminists were egged and had their murals and posters destroyed in a sustained attack that lasted almost two hours without police intervention.

A similar attack took place in 2022 on International Women’s Day, when  Marguerite Stern, a feminist activist known for raising awareness of femicides in France and founder of L’Amazone, shared a video depicting a feminist demonstrator being assaulted by a trans activist.

One Twitter user who called attention to the vandalization of the SBS collage noted in a separate thread that this was not the first time trans activists had targeted sites which had no relation to LGBT causes.

In 2020, French trans activists on Twitter claimed responsibility for the desecration of a plaque at an elementary school intended to commemorate the deportation of Jewish children who had once attended the school to Nazi concentration camps.

The activists had spray-painted over the motto of the French Republic, replacing “Fraternite” with “Adelphité” — a ‘gender neutral’ word for ‘solidarity’ that has become popular amongst French Queer activists.

Speaking to Reduxx on the vandalism, Désirée, a representative of L’Amazone, said she was somewhat shocked by the destruction of the mural to the infant victims of SBS.

“I know [trans activists] hate us… but this was about babies!” She says, “If they had been the ones who had put up this mural, we would have never touched it. We have seen [street-art] they have created, and we leave it alone.”

Désirée says filing a police report about the destruction of the memorial is not an option due to the fact the mural itself was technically using public space.

She notes that the mothers who had originally contacted them to create mural have already expressed they want to see it repaired.

“[The mothers] were upset, but we found they were the ones comforting us! They told us ‘once you have buried your child, you are no longer afraid of anything.’ They are amazing. They have incredible resilience,” she lauded, stating that re-creation efforts are already in the works.

“We knew trans activists hated women, but now we know they also hate children,” Désirée says, “We don’t expect an apology, but we wish they had the decency to apologize to the mothers. Ripping their children’s names from the wall was like taking them away all over again.”

Désirée expresses frustration with the French mainstream media, noting that few of the violent or destructive acts committed by trans activists in recent months have made it to national news.

“It would be good if they grasped the scope of what was happening and began to denounce it. No women deserves to be harassed because she believes in material reality. But we will continue to fight for the rights of women and girls! This fight is too important for us to let ourselves be frightened by people whose only drama in life is being misgendered.”