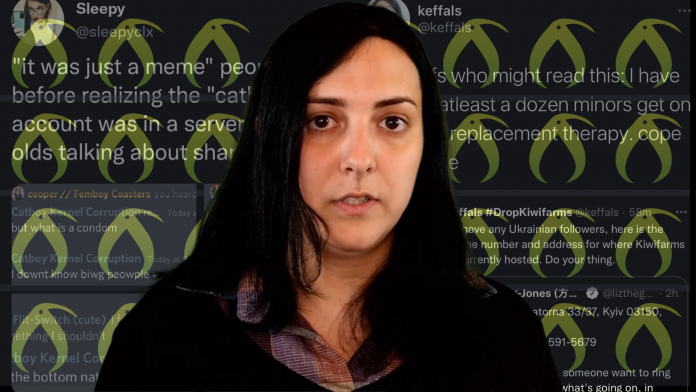 Transgender Twitch streamer Keffals has launched an all-out war against a controversial internet forum. While the streamer claims it is in response to a ‘swatting’ incident, others say the move is an attempt to suppress incriminating information about himself that was being shared on the site, including that he facilitated the illegal access of minors to cross-sex hormones.

“Clara” Sorrenti, born Lucas Roberts and better known by the username Keffals, has declared an online campaign against Kiwi Farms, a forum largely dedicated to sharing information about online personalities.

Sorrenti has urged Cloudflare, a security service which enables websites to mitigate malicious attacks designed to make them inaccessible, on Twitter to stop providing protection for the website.

Sorrenti’s efforts come after an August 9 YouTube video in which he tearfully claimed he was “swatted” by London, Ontario police after Kiwi Farms users leaked personal information about him. “Swatting” is a form of harassment in which a false tip of criminal activity is given to police with the intention of having officers respond aggressively to an innocent individual’s home.

In Sorrenti’s video, he was awoken to armed officers in his home on August 5. The officers were responding to terrorist threats issued to the London, Ontario police, purporting to be sent by Sorrenti. The streamer claims he was placed under arrest, and had police search his home and seize his property.

In the video, Sorrenti claims he was awoken by an officer holding an “assault rifle” to his face, and goes on to state he was misgendered and called by his birth name multiple times during the process.

London Police Service [LPS] has since released a statement regarding the arrest which contradicts Sorrenti’s account of the events.

“Officers did not conduct what is sometimes referred to as a ‘dynamic entry’ into Ms. Sorrenti’s residence,” the statement read, “Rather, they knocked on the door, announced themselves as police officers, and occupants answered. Any attempt by uninvolved third parties to suggest otherwise is inaccurate and irresponsible.”

Reduxx reached out to LPS for information on where the investigation stood, but they declined to comment, writing: “As this is currently an open and active criminal investigation, London Police Service will not be commenting any further on this matter.”

Sorrenti launched a GoFundMe after claiming he needed to rapidly relocate due to threats to his safety, and has since increased the goal of the campaign multiple times — from $25,000 to over $100,000, of which he has raised almost the total.

In a follow up YouTube video, Sorrenti claimed that he relocated temporarily to a hotel but after posting a photo of his hotel room online, users on Kiwi Farms allegedly analyzed the hotel room to find his location and then sent pizza deliveries to the hotel as a threat. He also claimed Kiwi Farms users had accidentally doxxed an elderly man with the same surname as him.

“The common denominator between me getting swatted, the pizza pranks, and the elderly man in Toronto getting swatted is that users of the website kiwifarms.com had doxxed me and publicly posted the address of my hotel room, the house that I used to live at, as well as the address of the elderly man in their attempt to find my address.” Sorrenti said in his Youtube video.

Sorrenti has repeatedly asserted in interviews that the reason that he has been targeted by Kiwi Farms is because he is a trans activist, but social media users have been quick to speculate that the real reason Sorrenti is calling for Kiwi Farms to be taken down is because of incriminating information about him that has been archived on the website.

While Kiwi Farms went temporarily offline for a few days after what site administrator Joshua “Null” Moon explained was a deliberate attack on the site, it has since returned and prominently features a detailed, 2000-page thread on “Keffals” for visitors to skim.

Solanders, another trans-identified male, reportedly produces hormones in his bathtub, teaches minors how to use them, and secretly distributes the hormones to minors without parental or medical oversight.

Sorrenti admitted his involvement with the illegal operation in a Tweet from June of 2022.

“Bob/Chloe” refers to providing minors with “bathtub estrogen” as “pink-pilling minors” and has claimed to have “helped” over 1000 children. He also allegedly runs a Discord server where he teaches boys how to voice train in order to make their voices sound more feminine.

But users on social media are also pointing to long-standing allegations that Sorrenti ran a Discord server called “Catboy Ranch,” along with a Twitter account of the same name.

Members of the server were called “catboys,” while Sorrenti called himself the “rancher.” He sent out kink collars to his favourite “catboys” with tags on them that declared them his property. Evidence was posted on Kiwi Farms that minors were involved in the “Catboy Ranch.”

Screenshots from within the server showed users claiming to be as young as 13, and a Twitter exchange has been archived showing Sorrenti engaging with a user who would have been 16-years-old at the time who also called him “rancher.”

Some sleuths also began assessing Sorrenti’s Twitter followers, and discovered he had been mutuals with a very small account which posting fantasy child sexual abuse material, and also argued that sexual contact between adults and children needed to be “deproblematized.”

The collection of incriminating information available on Kiwi Farms has led many to assert that Sorrenti’s motivation for wanting the site to be taken offline is a fear of his potentially illegal activity to remain publicly accessible while he is in the spotlight.

Sorrenti has updated his Twitter profile, urging his followers to “tell CEO @eastdakota of @cloudflare to drop Kiwi Farms” and has also shared the location information of Kiwi Farm’s current server host, calling for his Ukrainian followers to contact or even visit them.

On August 26, while Kiwi Farms was temporarily down, site owner Joshua Moon penned a general statement in which he slammed the efforts to take down his site.

“What I fear more than losing my site, or getting sued, or dealing with police, is living in a world where fat eunuchs can groom little boys and girls into mutilating their bodies and taking drugs in secret, while normal people are not allowed to even discuss it.”

Moon continued: “The mob has already planned subsequent targets. Should we stay down, they will then attack gender critical’ communities – especially those ran by and for women. No place can exist online which permits criticism of their fetishistic lifestyle, and nothing would excite them more than this power and domination struggle being inflicted on a female space instead.”

Sorrenti has announced he is planning a protest outside of Cloudflare’s San Francisco headquarters, but the company has issued a statement firmly asserting they had no plans of terminating their services to any client.

“Just as the telephone company doesn’t terminate your line if you say awful, racist, bigoted things, we have concluded in consultation with politicians, policymakers and experts that turning off security services because we think what you publish is despicable is the wrong policy,” the company’s CEO, Matthew Price, wrote in a blog post on August 31.

While Sorrenti has suggested his opponents are all “transphobic,” multiple trans-identified people have also spoken out on his antics, including Laura Hobbs. Hobbs has been vocal defender of Kiwi Farms on Twitter, despite having been a target of the forums in the recent past.

“I was definitely a very brainwashed rabid [trans rights activist] at one point. and would call myself an [social justice warrior] for a long time. I thought I was doing something for others and was blinded by my own selfishness and desire to be some kind of leftist activist important figurehead,” Hobbs told Reduxx.

In May of 2021, Hobbs went viral after having an emotional outburst at a Popeye’s restaurant for being misgendered by a member of staff. Kiwi Farms users quickly took to mocking Hobbs for the recorded breakdown, which had invited significant negative attention across social media.

Reading through hateful comments on message boards, Hobbs would go on to create a Kiwi Farms account and directly engage with users.

“They were just a lot more reasonable than I thought,” Hobbs says. “When I first got onto Kiwi Farms, I figured ‘these guys are probably pedos or something so I’m going to troll them.’ But I learned that the thing we have in common is we [both] hate predators, and genuine conversations started to evolve from there. I even made friends and found a lot of support from them.”

Hobbs says not every user on the forum has been friendly, but many forgave Hobbs for the Popeye’s incident.

“I felt silly getting myself so mad about my [Kiwi Farms] thread when I started finding the posters just entertaining and funny … I feel like it was really constructive that we opened a dialog, ultimately. More importantly I came to the logical conclusion that their forum is their means of free speech and free expression, which is something very delicate to be tampered with.”

Hobbs, who began transitioning in 2008, now seeks to “gate-keep” the trans community from “trans trenders” and other individuals Hobbs considers to have predatory intentions towards women and children.

Since Sorrenti’s campaign against Kiwi Farms has gone into full swing, Hobbs has been a vocal defender of the site on social media. While condemning Sorrenti’s “swatting,” Hobbs shares speculation that Sorrenti may be motivated by a desire to erase any incriminating or embarrassing information about him on the site.

On the existence of the “Catboy Ranch” Discord server, which allegedly had minors as members, Hobbs calls it an example of “predatory” behavior from Sorrenti.

“What Keffals has going on is some obvious groomer cult, and this isn’t a rare thing when dealing with males who identify as trans. I also believe the behavior of [Sorrenti] towards minors and towards women and other trans people is a predatory, at least in a self promotional narcissistic kind of way.”

Hobbs acknowledges the perspective isn’t a popular one in the trans community, but is comfortable being a dissident voice.

“In LGBT circles, we are shamed for calling out trans-identifying predators and groomers. People are having their accounts shut down from calling predators out for grooming children, and for calling pedophilia what it is. This trend is very dangerous and I believe it will create more victims because them and their supporters will be censored and silenced. The anti-free speech movement is bipartisan and is very bad news for victims of violent sexual crimes, for children and for women.”