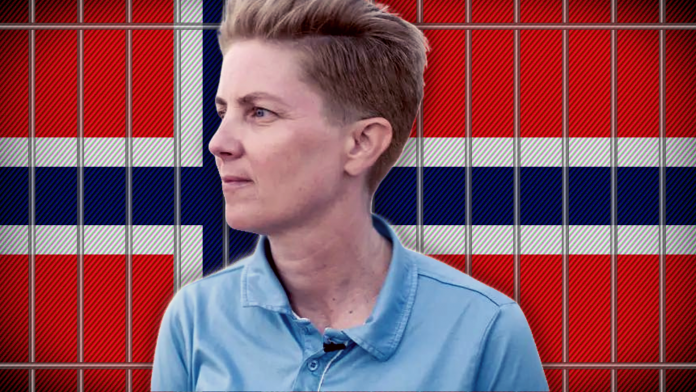 A woman in Norway is facing criminal charges and a possible prison sentence of up to three years for stating that men can not be lesbians. Tonje Gjevjon, a lesbian artist, was notified on November 17 that she was under police investigation for hate speech over a statement she posted to Facebook.

In her post, Gjevjon railed against trans-identified males who call themselves “lesbians,” and condemned trans activists who seek to criminalize women who oppose gender ideology.

Gjevjon particularly singled-out the actions of prominent Norwegian trans activist, Christine Jentoft – a man who claims to be a lesbian mother, and who currently serves as a representative for the nation’s leading trans activist group, Foreningen FRI.

Jentoft has been at the center of a clash between women’s rights activists and Norway’s hate speech legislation, which was revised in 2020. The amendments, which went into effect last year, included the category of “gender identity or gender expression” – a move women’s rights campaigners in the nation warned would result in a chill over free speech, especially where it related to the reality of biological sex.

Earlier this year, Jentoft filed criminal charges against Christina Ellingsen, a representative of Women’s Declaration International (WDI) Norway, for stating that men can neither be lesbians nor mothers. As reported by Reduxx in May, a police investigation was launched into Ellingsen’s alleged “transphobia,” and, like Gjevjon, she is facing up to three years in prison if found guilty.

Gjevjon says her Facebook statement had been a deliberate effort to call attention to the hate speech law. She did this by quoting the first statement prosecuted as hate speech by the law, where a man was convicted over the use of the sentence “men who perma-live as though they are little girls” in reference to trans-identified males.

In addition to calling out Jentoft, Gjevjon also turned her attention towards Norwegian politicians who have supported the legislative adoption of “gender identity” at the expense of women’s rights. One such politician, Anette Trettebergstuen of the Labour Party, is the current Minister of Culture and Equality and the only openly lesbian politician Norway’s Parliament.

During an open discussion hosted by the Labour Party last year, Gjevjon confronted Trettebergstuen, questioning how she intended to protect the rights of women and girls, and whether she believed that men could be lesbians.

“I believe it is absolutely necessary to place biological sex as the basis in all contexts where sex has legal, cultural, or practical relevance, and that equating sex with gender identity has harmful, discriminatory consequences for women and girls – especially lesbians,” Gjevjon stated during her question.

“Will the Equality Minister take action to ensure that lesbian women’s human rights are safeguarded, by making it clear that there are no lesbians with penises, that males cannot be lesbians regardless of their gender identity, and by tidying up the mess of the harmful gender policies left behind by the previous government?”

Trettebergstuen responded: “I do not share an understanding of reality where the only two biological sexes are to be understood as sex. Gender identity is also important.”

Last year, while in the role of Equality Minister, Trettebergstuen was featured in a video promoting the political goal of a government-sanctioned “third gender” category. The short film portrayed women dressed in the uniforms seen in the popular television series The Handmaid’s Tale, acting as the “birthing women” for gay men.

Gjevjon first began expressing criticism of gender identity ideology, which she calls the “queer patriarchy,” in 2017 after English feminist author Julie Bindel had her invitation to speak at a university revoked over claims of “transphobia.”

Since becoming more vocal with her “gender critical” views, Gjevjon has been blacklisted by Norway’s artistic community – a scene she had previously been flourishing in.

Writing for Klassekampen in February, Gjevjon detailed her experiences with being disavowed by the art world, her exhibitions cancelled, and labelled as “dangerous” by trans activists.

Gjevjon is the creator of an all-lesbian group called the Hungry Hearts, an art project that produces music, live performances, and installations. In 2017, the Haugar Art Museum invited Gjevjon’s Hungry Hearts to participate in an exhibition on gender fluidity. At the time, Gjevjon warned the museum’s curator that trans activists would pressure management to exclude her.

Just a few days prior to the exhibition’s opening, Gjevjon was informed by museum management that they had received multiple complaints about her work, and in particular, the lyrics to a song she had produced that referenced vaginal anatomy. Her contributions were removed from the exhibition after the museum asserted her safety could not be guaranteed.

One critic, a trans-identified male who uses the name Ingrid Frivold, went so far as to compare Gjevjon to a Holocaust denier in a message he sent to the Haugar Art Museum, saying: “for many trans people this feels as inflammatory as if David Irwing had been asked to speak at the opening of an exhibition about the Holocaust.”

Notably, Frivold was interviewed sympathetically in an article in 2018 for Oslo news outlet Dagsavisen titled “A Penis in the Women’s Locker Room” wherein he compared his genitals to a “cameltoe” and argued that women must become comfortable with seeing male genitalia in locker rooms and other areas of undress.

In 2020, Frivold was appointed to the advisory board for trans activist group Foreningen FRI. He currently serves as a member of the board for “queer representation” at Norway’s National Museum.

Gjevjon was further censored in 2020 by the Kunstplass Contemporary Art Museum in Oslo, where she had been invited to curate a solo exhibition featuring the works of deceased lesbian artist Marianne Rovas Olsen.

When providing rationale for cancelling her invitation, the museum’s curator told Gjevjon it would be “ruinous to her reputation” to be associated with her. In November 2021, she was again uninvited from displaying her own work at the Women’s Museum.

“I have stated that women are female, that lesbians do not have penises, that children should not be responsible for decisions they do not have the capacity to understand the scope of, and that no-platforming is harmful to democracy. For these opinions I have been canceled several times,” Gjevjon wrote in Klassekampen.

She went on to note that, after more than 15 years of participating in Norway’s art and music scene, she had never received such censorship until she began criticizing the belief that a man can identify as a woman.

“I was not prepared for the extent of how queer organizations, politicians and activists would demonize a lesbian artist who was not in step. Trans activists contact people I work with, portraying me as hateful and warning against being associated with me,” Gjevjon said.

Speaking with Reduxx, Gjevjon said that she had been told point-blank by a museum official that she was blacklisted from the community for her views, and that attempts had been made to have her wife’s employment terminated.

She expressed frustration with Equality Minister Trettebergstuen for refusing to support the rights of lesbians to their same-sex attraction, and emphasized how much funding and support the gender identity belief system receives from the government.

“The Government, with the Minister of Equality and Culture, gives tens of millions in state support to queer organizations that carry out LGBTQI activism which includes the demonization of lesbians and women who think like me,” Gjevjon said.

Gjevjon pointed to a culture of “pornification” and “objectification” as intertwined with a “removal of language that precisely describes what it means to be a woman.”

“I recognize this as the degradation and dehumanization of girls, women and lesbians. I don’t believe in the concept of gender identity. And males cannot be or become women or lesbians,” Gjevjon said.

Since 1997, Foreningen FRI was working towards the repeal of sexual paraphilias and fetishes as mental health diagnoses in both Norway and abroad. In 2010, many paraphilia-related diagnoses were removed from Norwegian medical literature, and in 2018 the World Health Organization (WHO) followed suit.

FRI’s campaigns successfully resulted in sadomasochism, transvestic fetishism, and general fetishism being re-classified as variants in sexual arousal in the WHO’s 11th edition of the International Classification of Diseases.

The first discrimination charge lodged on the basis of gender identity was filed in 2017 by a trans-identified male against a woman who had asked him not to shower in the women’s locker room of a sports center.

Though she was later cleared of all charges against her, the majority of tribunal members involved with the case chastised the woman for complaining. The tribunal emphasized “that transgender people are vulnerable and need special protection against harassment.”