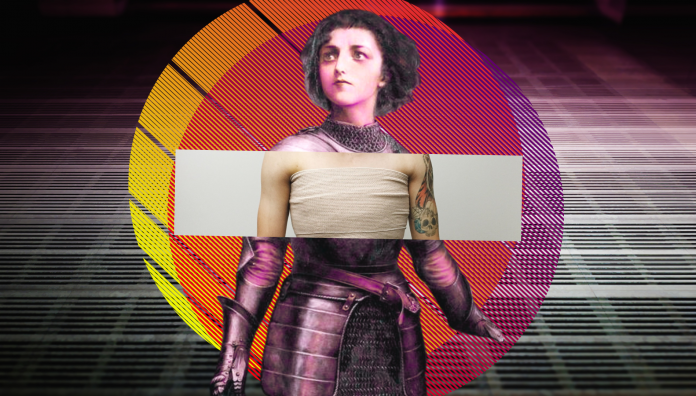 According to historian Bettany Hughes, of all written and recorded history, only 0.5% is about women despite women consistently making up about 50% of the population.

But though the odds were stacked against them, many incredible women and girls defied the often-oppressive confines of their gender roles to become recognizable household names. This is a positive. After all, little girls having a diverse range of same-sex figures to look up to and be inspired by should be, by all accounts, a good thing. And, surely, no one would stand in opposition to recognizing the great women of history who have such little space to shine as it is, right?

In recent years, gender ideologues have taken their great eraser to the textbooks of history in an attempt to redefine and otherwise revise the record to insert themselves where they were never before mentioned. As in all other issues, the ideologues are particularly heavy-handed when it comes to women.

History’s great females have not been spared the influence of gender ideology, which, itself is historically non-existent. After all, modern gender theory is a new concept. The concept of gender as we understand it was coined in the 1960s by disgraced sexologist John Money. The term “transgender” was also coined in the 1960s but only gained popularity in recent years. Similarly, “non-binary” has existed only since the 1990s.

Applying terms related to “gender identity” to individuals who existed long before the terms did is moot, and more of a type of bizarre fan fiction than anything else.

But that hasn’t stopped the trans-historians of trans-history. Armed with sexist stereotypes, they have been marching through history’s great women, so kindly “correcting” the record of their lives where they have determined one or another wasn’t sufficiently “womanly” enough. All in the name of smashing the gender binary, of course.

The most recent example of this is the Sainted Joan of Arc. Joan was a French heroine that led the French army to victory against the English in 1429, purportedly after receiving divine guidance to do so. As she led troops into battle, she donned more practical men’s clothes and armor. After being captured by the English in 1430, she was tried in a kangaroo court on charges of witchcraft, heresy, and defying the divine law for having dressed as a man. She was burned alive in 1431 at the age of 19.

An incredible story of an inspiring, powerful woman.

On August 11, London-based theatre Shakespeare’s Globe announced it’s upcoming play I, Joan, which would re-write her story to make her non-binary who utilized ‘they/them’ pronouns.

In their description of the play it reads, “Rebelling against the world’s expectations, questioning the gender binary, Joan finds their power and their belief spreads like fire.”

While it is true that Joan defied the world’s expectations of her, play writer Charlie Josephine’s implication that she was less of a woman for doing so only reinforces these societal expectations of what a woman should be.

Calling Joan “they” instead of “she” does nothing to question the gender binary. Rather than acknowledging that Joan was a woman who overcame the expectations imposed upon her because of her sex, Joesphine suggests that being a woman is nothing more than adherence to those very expectations.

Rejecting gender roles such as femininity and submissiveness is to reject womanhood itself. The gender binary is not being questioned, it is being upheld in the most extreme way possible. Part of the reasons cited by the English for Joan’s execution was her gender non-conformity. Nearly 600 years later, and the message is still the same; women don’t act this way, women don’t dress this way, women aren’t warriors, women aren’t leaders.

Unsurprisingly, this is not the first time Joan has been posthumously transitioned.

The controversial private gender clinic, GenderGP published an article on their website in 2021 titled “Non-binary people in history: Why aren’t they recognized?” and included Joan of Arc in their breakdown.

“The famous French warrior Joan of Arc used female pronouns, but when she was called by God, took up exclusively masculine clothing and social roles,” it read.

Unfortunately, Joan is not the only woman who has had her womanhood stripped from her for not conforming to their stereotypical sex-role.

A blog post referred to the founder of modern nursing, Florence Nightingale, by he/him pronouns because she sometimes called herself a “man of action” and a “man of science,” and had a close, documented relationship with a female friend. They argued that it was far more likely that she was a man than a lesbian.

The author of Little Women, Louisa May Alcott, has also been described as “trans” by both activists and Queer news outlet LGBTQ Nation. A tweet from earlier this year wracked up over 34,000 likes after a round-bespectacled gender special firmly declared Alcott was transgender.

It is true… Alcott often expressed wishing she had been born a boy. But was is the likelihood she simply envied the freedom that was afforded to boys and men during the time period in which she lived?

Struggling to conform to gender stereotypes and female socialization is a major theme of Alcott’s most famous novel. The novel tells the coming of age stories of four sisters, two of the sisters, Amy and Jo initially attempt to break free from the constraints of gender roles. The novel questions the validity of gender stereotypes for both men and women. But the commentary of Alcott’s novel, though published in 1868, are apparently too progressive for modern day trans activists who see Alcott’s and her characters rejection of gender roles as a sign they were really men.

Another example of a woman “transed” posthumously is diarist and landlord, Anne Lister, has been the topic of heated debates over the last several years due to a plaque honoring her originally excluding the word lesbian.

Lister did not identify as a lesbian, because the term was not in use at the time, but in her diaries she said she only loved the “fairer sex” and described her relationships with women. Lister also took communion with another woman in what has been described as the first lesbian wedding in the UK. But activists have argued that due to the fact Lister dressed in masculine clothing and adopted the nickname “gentleman Jack, ” she was really transgender.

Unsurprisingly, historical lesbians are among the most likely to be posthumously transitioned, which does nothing but demonstrate that lesbophobia runs deep within gender ideology. Subscribers to this world view even go as far as to say having affairs and relationships with women is a sign that a woman is not truly female.

There is no where this is more demonstrated than in the historical revisionism surrounding “female husbands.” This was a rare phenomenon through the 17th – 19th centuries in which women attempted to live as men, and sometimes even married women in the process.

One of the most noted “female husbands” was Sarah Paul, who went by the name Samuel Bundy. Paul was sent to prison after being convicted of defrauding a woman named Mary Parlour by marrying her as a man, but Parlour is largely believed to have been pressured by her community into pressing charges against Paul as she had known Paul was a woman throughout their relationship.

Other “female husbands” had similar stories, though in some cases, their female partner was truly ignorant to their true sex and was quite surprised to discover they hadn’t married a man, such as in the case of Mary Hamilton.

In 2020, Jen Manion released a book asserting that effectively every “female husband” was either transgender or non-binary, totally skipping over the possibility they simply could have been lesbian women or women who just wanted the same freedoms as men had. This claim has been repeated in the Guardian as recently as last year. Interestingly, it appears that most sources pre-2019 viewed the “female husbands” largely as lesbian women seeking to live in peace with their partners.

The proponents of transitioning these dead women love to claim their intentions are rooted in smashing the gender binary and defying gender norms, but, without fail, the subtext is always identical to the narrative of most extremist of misogynistic traditionalists. So rapidly do the gender binary smashers become the gender binary gestapo.

Women cannot be women unless they act, dress, love, and conform in very specific ways.

A fantastic example of that is the female Viking warrior who was recently posthumously transed because of the way in which she was buried.

In the 1870s, when her 10th century grave was first uncovered, the Viking warrior was originally assumed to be male because of how she was buried. But in 2017, with the advancement of forensic science, she was determined to have been female. Rather than being both curious and excited for the prospect to learn of a great female soldier, the revelation left academics scrambling to argue that she may have been “transgender, non-binary or gender fluid.”

Despite this being promoted as the “progressive” viewpoint, it almost twins the line of thinking of the original researchers who undercover the bones in the 1870s. Both saw a skeleton buried with honor and with weapons and thought: “This can’t be a woman, women can’t be warriors.”

Throughout history, remarkable women have rejected gender roles and shown the generations of women that came after them that there were many ways to be a woman. They showed us that woman can be scientists, warriors, writers and much more. They carved out a path for women who wanted to have short hair, or wear masculine clothing, or love other women, or even live independent of men. Now, gender ideologues are trying to regress society back to the rigid view of what women and men should be. If a woman does not adhere to these ideas, she must not really be a woman.

In this moment, I am reminded of the opening of Joan of Arc’s trial, historical records showing her persecutors referred to her gender bending behavior.

They called her disgraceful for “putting on the clothing of the male sex,” labelling it a “Striking and vile monstrosity” which disregarded “what is honorable in the female sex.”

If only they’d known she was non-binary!

Shay Woulahan
Shay is a writer and social media content creator for Reduxx. She is a proud lesbian activist and feminist who lives in Northern Ireland with her partner and their four-legged, fluffy friends.
READ MORE
Opinion