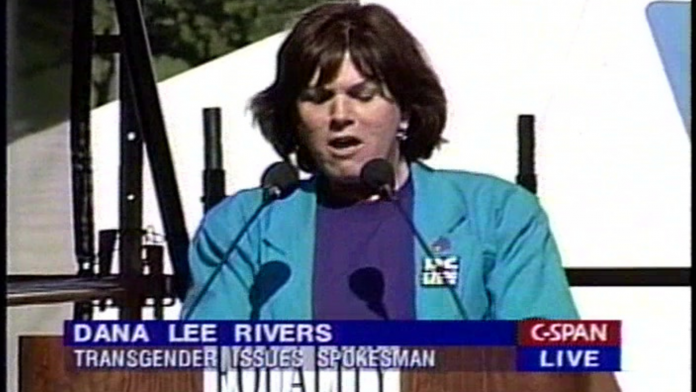 A prominent trans activist has been convicted in a 2016 triple homicide involving a lesbian couple and their son. Dana Rivers, 67, born David Chester Warfield, was found guilty of murder in the first degree for the killings of Charlotte Reed, Patricia Wright, and Benny Diambu-Wright.

Police were called on the night of November 11, 2016, in response to the sound of gunshots being fired outside the home of Wright and Reed in Oakland, California. When authorities arrived, they found Rivers covered in blood and gasoline and fleeing from the house, which had been set ablaze. When officers searched Rivers, they found a bloody screwdriver, a knife, brass knuckles, bullets, pepper spray and Benny Diambu-Wright’s iPod, according to court documents.

When discovered by police, Rivers had been heading towards his black Harley Davidson motorcycle, which was parked outside of the home with the keys left in the ignition. When police searched the Harley, they found blood on the bike, and a bloody knife in its saddlebag.

Examiners found that Charlotte Reed had been stabbed and bludgeoned dozens of times in addition to having gunshot wounds. Her partner, Patricia Wright, had been shot twice, and her son, Benny Diambu-Wright, who had just graduated from Berkeley High School, had been shot in the heart. The bodies of Wright, Reed, and Diambu-Wright were found inside the burning wreckage. Rivers was quickly taken into custody and booked at an Alameda County jail.

According to police reports, Rivers “began to make spontaneous statements about [his] involvement in the murders” while being arrested. Rivers ultimately confessed to killing the two women and their son, but entered a plea of not guilty on charges of triple homicide in 2017.

The case had first been set for trial in 2019, but was repeatedly delayed in order to accommodate an investigation into Rivers’ mental health. The trial finally began on October 31.

Prosecutor Abigail Mulvihill of the Alameda County district attorney’s office wrote in a trial brief that Reed had first met Rivers at the Veterans Affairs Center in Menlo Park in 2016. The year before, Rivers had joined an “all-female” motorcycle gang called The Deviants, which had ties to Hell’s Angels, according to court testimony. Rivers was referred to as the “enforcer” of the gang, and he was using the pseudonym “Edge.”

In February 2016, Charlotte Reed started spending time with The Deviants, but she decided to leave after three months because it “became too political for her,” according to court records.

After she left the club, Reed began to experience threats. The trial brief presented by Mulvihill claims that “there was backlash from the club for her departure,” and a friend of Reed’s recalled seeing Rivers “just sitting and staring at Ms. Reed” on one occasion at the Menlo Park.

Mulvihill’s trial brief also states that Reed’s daughter told police that she had become afraid that Rivers “wanted to hurt her mother.”

Rivers’ multiple tattoos were mentioned on several occasions during the trial. Of particular note is a tattoo of a gun on his leg with a message reading, “Do not lie to me, fucker.” A depiction of empty rounds of ammunition are scattered beneath the weapon.

Former president of The Deviants motorcycle club, Sandra Carranza, confirmed during court testimony that Rivers held the position of “Sergeant in Arms,” and stated that the role required him to “keep order” if there was ever a dispute among members of the club.

Defense attorney Melissa Adams had requested that Rivers “be referred to only as Ms. Rivers, or Dana Rivers, or Dana” rather than “the defendant” in an effort to reduce bias against him.

“In addition, Ms. Rivers uses female pronouns such as she, her and hers. The court shall order all person [sic] involved in this case to use these pronouns as well,” wrote Adams in court documents.

Prior to the slayings, Rivers was a prominent trans activist known for fighting against “gender discrimination.”

Rivers became known in 1999 after he was fired from Center High School in Sacramento County, California, for openly discussing his “sexuality and the importance of gender self-determination” in class with students.

Members of the Center Unified School Board who voted for Rivers’ dismissal argued that the decision had nothing to do with his gender identity, but rather due to concern for the rights of parents, some of whom had complained to the school administrators that Rivers had been discussing inappropriate and sexual aspects of his ‘transition’ with students.

According to a 1999 article in The New York Times, one parent stated that “[Rivers] said he had been sodomized as a youth and that he always felt he was a woman trapped in a man’s body and that he was going to be changing into a woman in the fall. He should have gotten permission from the parents to say this.”

Following the administration’s decision not to renew his employment, Rivers subsequently initiated a widely-publicized discrimination lawsuit that launched his career as a trans activist and resulted in a compensatory award of $150,000. He appeared on the Today Show and Good Morning America, and had even been profiled in the New York Times, quickly elevating his profile as a respected LGBT advocate.

Rivers was a keynote speaker for the National Center for Lesbian Rights as well as for The Tiffany Club, an organization founded to promote the political interests of those with “gender confusion.”

Prior to the murders, Rivers also spoke as a guest lecturer at several universities, including Stanford and UC Davis, and served as a Board Member for the International Foundation for Gender Education (IFGE).

Feminist activist Kara Dansky was present as Rivers’ verdict was read, and expressed a cautious skepticism for what is coming next.

“The case is not ready to proceed to sentencing. Rivers has been found guilty, and, to the best of my understanding, the jury will be reconvened on December 5 to consider his insanity claim,” Dansky told Reduxx. She explained that Rivers’ sentencing is largely contingent on the consideration of his claim.

“If he prevails on the insanity claim, he won’t go to prison at all. Instead, he will go to a mental facility,” she said, continuing that if Rivers is sent to prison it is unclear “whether he will be placed in a women’s prison. We know that he has the right to make that application under state law.”

Under current California law, Rivers, if sent to a prison, would likely find his way into a women’s correctional institution, if not accommodated immediately due to his legal sex being “female.” California has one of the most liberal prisons self-identification policies in the country, something that has become a point of contention for women’s rights advocates.

S.B-132, also known as the Transgender Respect, Agency, and Dignity Act, was signed into effect in January of 2021 by California Governor Gavin Newsom. The law provides inmates housing based on their self-declared gender identity status.

The California Department of Corrections and Rehabilitation has previously confirmed to Reduxx that prison transfer requests are based entirely off of a Gender Identity Questionnaire that could be issued during reception or requested by the inmate at any time during their incarceration.

The Questionnaire is form with a short series of questions in which inmates can declare their pronouns, honorifics, and gender identity.

Male inmates do not need to identify as transgender to request transfer, and can simply identify gender non-conforming, or non-binary.

Earlier this year, Reduxx reported that a pedophile who had molested a 4-year-old girl had been moved to the California Institution for Women despite having been denied a gender and name change, and still legally being a male.