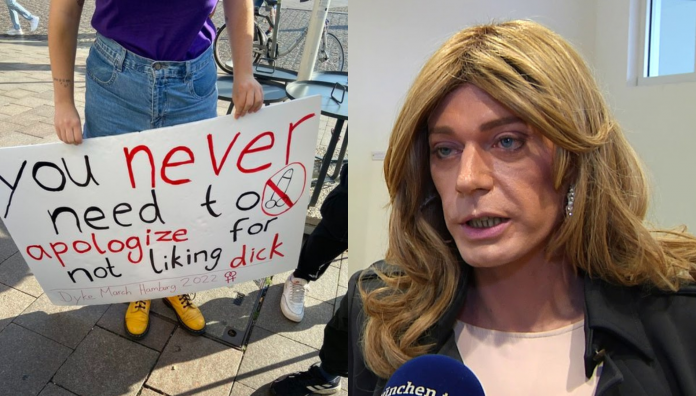 Lesbians who had congregated at Dyke March in Hamburg on Friday were met with hostility, and at least one woman was physically assaulted by trans activists after asserting that men cannot identify as lesbians.

Women had gathered to peacefully protest one of the event’s scheduled speakers, a male politician who recently began identifying as a lesbian woman. The official Instagram account for Dyke March Hamburg advertised that ‘Tessa’ (Markus) Ganserer, who declared a female identity in 2018, would be a guest speaker at the event.

Ganserer, a trans-identified male member of German parliament, was elected to Germany’s Bundestag in September 2021, taking a seat that was reserved in quota for female political representation.

Ganserer was first elected as a male to the Bavarian state parliament in 2013 representing the Greens. Since self-identifying as a woman, he has made numerous appearances at events specifically for women. In March, Ganserer was selected by the Green Party to present at an event highlighting women in politics. The event, titled Women*. Power. Politics, used an asterisk throughout its description to indicate “all women are welcome,” by which they were referring to males who identified as women.

Last year, he took part in a demonstration for lesbian visibility organized by Dyke March Nürnberg, where he was photographed with his wife holding signs that read “Lesbian cake.”

On April 26, Ganserer tweeted in support of the Lesbian Day of Visibility for “all lesbians, cis and trans*.” In July, he was interviewed by Siegessäule, a publication owned by Manuela Kay, organizer of Dyke March Berlin, and spoke about the rights of “lesbian mothers.” Ganserer has fathered two children with his wife.

Leading up to the event, the hashtag #MarkusIstNichtLesbisch was trending on Twitter as German women expressed their outrage that a man was set to speak, ostensibly on his experience of identifying as a woman.

A group of women who attended the Dyke March to protest held signs which read, “You never need to apologize for not liking dick,” “I like women, not men,” and “Lesbian: a homosexual adult human female,” as well as other signs pointing out the homophobia of trans activism and denouncing lesbian erasure.

Other participants of the Dyke March began hurling insults at the women, and some chanted “TERFs go home.” As the animosity mounted, police pulled the women out of the main march and stood with them to the side.

Ana Julia Di Lisio, the founder of women’s rights group Radfem Berlin, told Reduxx that trans activists had attempted to set fire to the banner defining lesbians as female in a previous demonstration in Berlin. At the Hamburg Dyke March, the same banner was targeted, and a woman attempted to rip the banner from Di Lisio’s hands.

“She wanted to destroy all of it. She tried to break the bamboo poles that held it up, and when they didn’t break, she put more force until I tried to stop her. She reacted violently and continued to twist the banner and this way she hurt my arm with a cut and scratches and a hit to my lip,” Di Lisio said.

As the police officers were in close proximity, Di Lisio immediately filed a report.

Di Lisio stressed that although a woman had attacked her, she believed that several men who were identifying as transgender worked her up to it. “These men kept agitating verbally while we walked with our banners, but the ones who came to attack us were mainly women triggered by these men.”

According to Di Lisio, Ganserer did not speak at the event as scheduled. When asked why she believed that was the case, she said, “That might have to do with the fact that Dyke* March Hamburg was expecting us and they did not want to expose Markus [Ganserer]. It gave me the impression the police were informed about us coming, and I say this because the police came to us before we even joined the march… to ask us what we were doing there.”

Di Lisio told Reduxx that the police pulled their group aside before they had even entered the march and cautioned them. “The police told us that they were informed of who we are and they asked us to remain peaceful, which we did.”

“When I got attacked, someone from the Dyke March Hamburg was taking photos instead of coming to help,” Di Lisio said, and clarified that under German law passersby are required to intervene when witnessing an assault, “So the organization neglected their duties to keep order as promised.”

Di Lisio told Reduxx the widespread acceptance of males identifying into lesbianism has had grave consequences for the rights and safety of lesbian women.

“The effects of these men declaring themselves lesbians and pretending to fight for the specific rights and needs that lesbians have are devastating … The lesbian erasure in countries which already have self-identification laws is tremendous,” Di Lisio said. “No man who declares himself a woman or a lesbian changes his status as a man, nor by doing so do his privileges disappear because of a legal fantasy in a document, nor because he has ‘feelings’ of being a lesbian.”

Prior to the event, organizers uploaded photos to social media showing them creating signs which read, “F*ck TERFs” and “TERFs are stupid.”

Ganserer is not the only man identifying as a woman who holds political power in Germany. Maike Pfuderer is a trans-identified male who is a spokesperson for the Federal Working Group on Lesbian Politics for the Green party. On social media, Pfuderer frequently denounces as “TERFs” those who reject the notion that men can identify as women.

In April, a heterosexual German man named Francois Etscheid declared his sexual orientation as “lesbian” and was interviewed by media as stating that he was looking to raise awareness of the “rare phenomenon” of “lesbian men.”

In July, lesbians were attacked at a Dyke March in Cologne, and one woman was grabbed and choked by a transactivist. At the same event, a small group of pro-pedophilia activists displayed a “MAP” flag (minor-attracted person), and did not report being attacked or insulted.

German lawmakers are currently considering a proposed self-identification policy which would allow anyone aged 14 years old and older to change their legal sex by filling out a form. Parents of children under 14 would have the right to file the form on their child’s behalf. If one of the legal guardians refuses to sponsor their minor’s sex marker change, a family court would reserve the right, at the request of the minor, to “replace the decision of the parents based on the best interest of the child.”

The full text of the proposed and amended legislation is expected to be made public by autumn.

A group of academics co-authored an open letter on June 1, calling for an end to the promotion of gender identity ideology in government-sponsored media. Simultaneously, they also released a dossier that revealed how “explicit sexual media directed at children and young adults,” particularly on the topic of gender identity, was being promoted by government subsidized media channels.