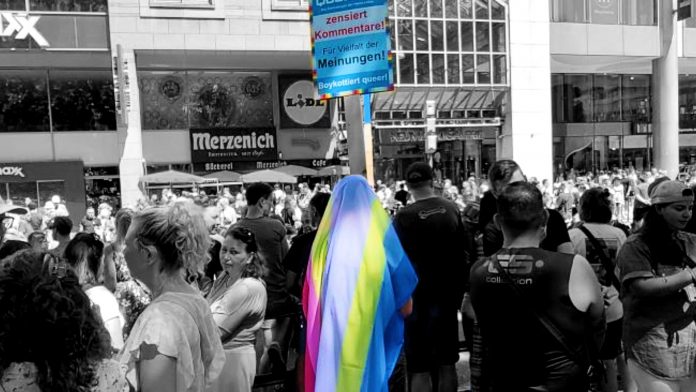 Reduxx has learned that members of a German pro-pedophilia group were present and demonstrating during one of Europe’s largest Pride celebrations in Cologne.

According to a post on the website K13online, members of the pedophile community called Krumme-13 congregated at the parade, colloquially known as Christopher Street Day (CSD), on July 2, and displayed a flag representing “minor-attracted persons” pride.

The post uses the acronym LGBTIQ+P and demands the “official inclusion of pedophiles” within the LGBT movement. Describing the symbolism of the MAP flag, Krumme-13 says that the colors “connect pedo-, hebe- and/or also partheno-/ephebophiles,” which are sexual paraphilias that distinguish the preferred age ranges for sexual abusers. The baby blue and pink stripes in the MAP flag which symbolize a sexual interest in young boys and young girls, respectively, correspond with those seen in the transgender pride flag.

Popular fact-check website Snopes has claimed that the MAP pride flag does not exist, despite its documented use by pro-pedophile activists. Instead, Snopes states the flag was a “troll experiment on Tumblr” created as part of a “fear-mongering campaign” intended to “link pedophilia to the LGBTQ community.”

At the Pride event in Cologne, pro-pedophile activists also carried signs opposing the “censorship” of the organization Queer.de and advocated for a “diversity of opinions” within the LGBT community.

Krumme-13, along with other German child sex abuse advocates, call for the inclusion of pedophilia as a protected “sexual identity” in accordance with Article 3 of Germany’s Basic Law, which prohibits discrimination on the basis of certain characteristics, including race and sex.

On the community’s main forum, activists are already planning out a presence at the next Pride parade.

“In 2023 there will be CSD [parades] again in many cities. K13online is already calling on the German pedophile scene to actively participate in one way or another in the [demonstrations] of the LGBTIQ+(P) communities,” a post reads.

A statement on the K13online website asserts that “pedophilia is an independent sexual identity and must therefore also be protected by Article 3.” The justification provided for this position, according to Krumme-13, is that “the vast majority of pedophiles do not commit any crimes,” and thus, their sexual attraction is no different than homosexuality or heterosexuality in principle. The activists have been demanding that the “pedophile [sexual] identity” be “protected from discrimination, criminalization, exclusion and persecution” under Germany’s equality laws.

The German language does not distinguish between biological sex and the concept of socially constructed gender. The word Geschlecht is used interchangeably for both, and Geschlechtsidentität is the equivalent of the term “gender identity” and “sexual identity.” Therefore, the demands of trans activists to include “gender identity” as a protected characteristic overlap with the stated political aims of the pedophile community.

Krumme-13 is spearheaded by pedophile lobbyist Dieter Gieseking, who has filed a total of three petitions with the Bundestag, or parliament, calling on members of the political parties SPD (Socialist Democrats), FDP (Free Democratic Party) and the Greens to agree to an amendment to Article 3 which would protect pedophilia as a “sexual identity.”

Gieseking frames his campaigning as an effort to defend “children’s rights” and to protect “sexual minorities” from discrimination. The two most recent petitions submitted to the government were lodged on February 14, 2021.

In a 2018 interview for the program Veto, Gieseking repeatedly refers to pedophilia as a “romantic relationship,” and insists that children can seduce adults. “On the forums and in my experience there are many times, for example, when a boy of let’s say 12, actually initiates the relationship,” he says.

Gieseking also made several references to the Netherlands, a country known for its prominent pedophile activism and which currently hosts the majority — 66 percent — of all CSAM sites in the European Union. He told the interviewer, Holger Kreymeier, that Germany should follow the Netherlands’ lead and lower the age of consent to 12 years old. Dutch pedophile activists have been campaigning for a lower age of consent for several decades and were nearly successful in 1985, but were prevented by intense public scrutiny.

“That is just the current zeitgeist, in the past studies have shown the many benefits (of sex with children) for children… The problem is that victim protection and child protection organizations have sprung up and influenced mainstream media,” he added. Gieseking speaks of the multinational pro-pedophile campaigning that occurred through the 60’s – 80’s in nations such as the United States, United Kingdom, and the Netherlands as a better time for the “zeitgeist.”

“Dieter Gieseking … sincerely believes that pedophiles have the right to rape children as long as the child consents. We know of course that children cannot consent, but this is the basic tenant of the pedophile movement.”

Dr. Naudé is a Professor at Suwon University in South Korea, where his focus is on social sciences and linguistics. In February, Naudé’s research critical of “pro-pedophile” charity Prostasia was hastily deleted from The British Journal of Sociology and History after the group complained. Since then, Naudé has become publicly outspoken on creeping attempts to ‘normalize’ pedophilia within academic and social institutions.

Responding to Gieseking’s Veto interview, Dr. Naudé told Reduxx: “Gieseking shifts blame to child protection organizations for creating stigma following the clear pattern of projection that we see from pedophilia organizations such as NAMBLA, PIE, Prostasia and B4UACT. In their eyes, the pedophile is never to blame, it is always the society that is cruel for preventing child rape.”

The German government has its own dark history of supporting and even subsidizing child sexual abuse. Throughout the late 60’s – 80’s, German sexologists — including the originator of the term “cisgender” — began to frame adult sexual relations with children as progressive and harmless rather than abusive.

The infamous ‘Kentler Experiment’ conducted by Berlin-based sexologist Helmut Kentler saw foster children placed in the homes of pedophiles beginning in 1969 for the purpose of facilitating child sexual abuse. This experiment was authorized and subsidized by the Berlin Senate. In 1988, nearly two decades later, Kentler described the project as a “complete success” in a report he submitted to the Senate.

So pervasive was the cultural trend towards the legalization of pedophilia that even Germany’s Green Party advocated for the abolition of Paragraph 176 of the German Criminal Code, which criminalized sexual activity with children under the age of 14.

According to leading German women’s rights advocate and journalist Alice Schwarzer, feminist groups were the only ones vocally opposing the legalization of pedophilia being championed by members of the Green Party.

“As late as 1988, Volker Beck, [a former] parliamentary secretary of the Greens called for a ‘decriminalization of pedosexuality’ in a contribution to the polemic ‘The Pedosexual Complex’,” wrote Schwarzer in EMMA, a feminist publication she founded.

The legislation that would have lowered the age of consent was drafted in part by the Greens organization BAG SchwuP (Federal Working Group for Gays, Pederasts and Transsexuals). In 1984, the BAG SchwuP was delegated to the parliament’s working group for “Law and Society” and was financed by the federal government. The SchwuP coordinator, Dieter Fritz Ullmann, had been in prison as many as six times for child sexual abuse beginning in 1980. Yet Ullmann was active in the Greens at the state level and, from 1985, represented the party at the federal level.

Schwarzer has explained that feminists were slandered for “exposing the whole mess”. She also pointed out how women were accused of homophobia for calling attention to attempts to legalize child sexual abuse. “In this discourse, homosexual pedophiles have taken the lead, although straight pedophiles are in the majority. They cleverly mixed their demands with the fight against discrimination against homosexuals,” wrote Schwarzer in 2013.

Members of the modern German pedophile community who protested at the Pride event on July 2 made no reports of being physically or verbally assaulted for promoting their views. In contrast, during the same parade, a group of women were attacked by transactivists and called “TERFs” for implying that men could not identify as lesbians. One of their detractors was an organizer for the Dyke March.