World Health Organization: “Sex is Not Limited to Male or Female” 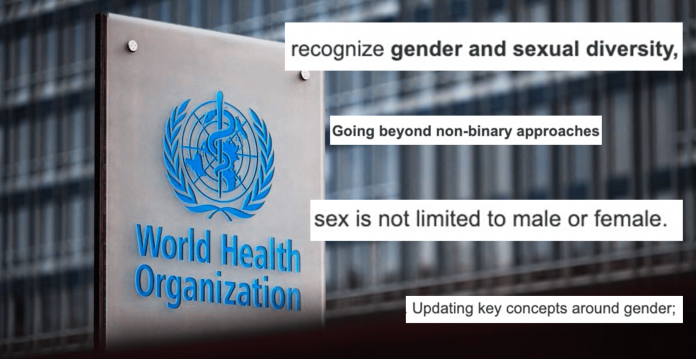 The World Health Organization (WHO) has announced that it will be updating a “widely-used gender mainstreaming manual” to include the notion that “gender identity exists on a continuum” and that even biological sex “is not limited to male or female.”

According to a notice posted to the Organization’s official website on July 6, revisions to the Gender mainstreaming for health managers: a practical approach will include “expanding on the concept of intersectionality” to reflect “new scientific evidence and conceptual progress on gender.”

Updates to guidelines will be “going beyond binary approaches to gender,” which the UN’s leading health body states will be integrated into their “approaches” and work internationally.

While it is unclear how, precisely, the guidelines will be implemented, women’s rights advocates have expressed concern that it will impact sex-based healthcare services under The WHO’s guidance. The Organization is responsible for collecting and tracking global health statistics and trends, and has close partnerships in many developing countries where women and girls experience the largest burdens to safe, appropriate healthcare.

Speaking with Reduxx on the upcoming changes, evolutionary biologist Colin Wright condemned the WHO’s notice as setting a confusing and dangerous precedent. Wright is the Founding Editor of Reality’s Last Stand, a Substack-based publication where news and information on the science of sex differences is discussed.

“I think it is really dangerous that gender ideology and sex spectrum pseudoscience has infected a global health body. The consequences of distorting reality in medicine can have extremely disastrous consequences,” Wright says.

“The sex binary reflects a fundamental truth of not only humans, but mammals generally. Countless scientific reviews support the need to include sex as a binary variable in medicine, and outline the consequences of not doing so.”

In an article published earlier this year, researchers found that even so-called “gender neutral” language in maternal healthcare had “consequences” that would result in “serious implications for women and children.”

Wright explains that he is currently unclear as to what evidence or “conceptual progress” on biological sex that WHO is referring to, but guesses it may have something to do with persons born with disorders of sexual development (DSDs) — also known as “intersex” people. While trans activists have recently begun pushing DSDs as evidence that sex is not binary, Wright cautions against that argument.

“The term ‘intersex’ does not refer to a third sex, but is rather an umbrella term for a range of developmental conditions that result in sexually ambiguous genitalia. For there to be more than two sexes, there would need to be another type of sex cell beyond sperm or ova that one’s primary reproductive anatomy can be organized around, through development, to produce.”

Wright continues: “Medical experts at the WHO should be intimately aware of this. And if they aren’t aware, that seriously calls into question the expertise of the WHO’s leadership. But if they are aware, that’s perhaps even more troubling because it means they stayed silent or stepped aside out of fear and have allowed activists to run the show. Both scenarios are incredibly troubling to consider.”

This is not the first time the WHO has shown signs of adhering to an ideological standpoint, rather than fact-based science.

In 2018, the WHO updated the 11th revision of the International Classifications of Diseases and Related Health Problems (ICD-11) after heeding the demands of the Norwegian Organization for Sexual and Gender Diversity (FRI). The FRI’s push was intended to have the WHO officially depathologize fetishism, sadomasochism, and fetishistic transvestitism by removing them from the ICD.

This most recent update to WHO’s ICD guidelines was also lobbied for with the assistance of Peggy T. Cohen-Kettenis, a Professor of Gender Development and Psychopathology at the Department of Child and Adolescent Psychiatry at Amsterdam University.

Cohen-Kettenis was partially responsible for the development of the “Dutch Protocol,” a euphemism that refers to the administration of drugs to halt a child’s puberty.

The WHO has also drawn criticism in the past for crafting policies which appeared to undermine the equality of the sexes. In 2016, journalist Victoria Smith called out a statement by WHO which declared that every individual — including single men — had “the right” to reproduce.

“All feminists — and indeed anyone serious about tackling patriarchy at the root — should be deeply concerned about the World Health Organization’s new definition of infertility,” Smith wrote in an article for The New Statesman at the time.

The standard suggested by WHO indicated that the inability to either find a suitable sexual partner, or the lack of sexual relationships which could achieve conception, could be considered a disability equal to infertility.

Declaring it a ‘right’ also implied that measures must always be available to provide equity for those who could not reproduce, such as maintaining the legality of surrogacy — an industry many feminists challenge the legitimacy of on the basis that it dehumanizes women.