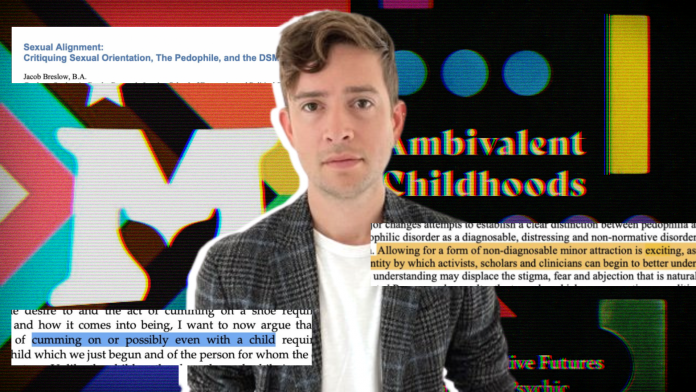 A trustee who sat on the board of a trans activist children’s charity has resigned following revelations he spoke at a conference held by an organization founded by a convicted child rapist.

Dr. Jacob Breslow became a trustee for trouble-plagued trans charity Mermaids in July of 2022. Breslow is an Associate Professor of Gender and Sexuality at the London School of Economics’ Department of Gender Studies.

On October 3, Breslow resigned after it began to circulate that he had a disturbing history of ostensibly pro-pedophile sentiment, including having spoken at a symposium held by B4U-Act — a charity founded in 2003 by convicted child rapist Michael Melsheimer.

Breslow’s presentation was titled Sexual Alignment: Critiquing Sexual Orientation, The Pedophile, and the DSM V. In the lecture, Breslow promotes the concept of treating pedophilia as a sexual orientation, a goal long-advocated by B4U-Act.

B4U-Act is widely credited with having popularized the term “minor attracted person” to describe pedophiles.

In their mission statement, they claim their purpose is to “publicly promote professional services and resources for self-identified individuals (adults and adolescents) who are sexually attracted to children and desire such assistance.”

But while B4U-Act postures itself as a respectable advocacy group, much of what it advocates for is the destigmatization of pedophilia. Though the organization argues that destigmatization would empower those who are sexually attracted to children to seek support and therapy, its pedophile founder explicitly stated it had far more nefarious goals.

In 2009, founder Michael Melsheimer advised his fellow pedophiles that the new approach would be focused around garnering public sympathy by falsely claiming the intention was to prevent child sexual abuse by humanizing pedophiles. Screenshots of the exchange were taken where Melsheimer was interacting with “boylovers” on the pedophile forum Boy Chat.

Some pedophiles on Boy Chat were concerned B4U-Act would covertly attempt to prevent them from engaging in sexual relations with children. To those members, Melsheimer asserted: “Be assured you will find no current reference to the prevention of offending. You can take that to the bank.”

During the discussions, it was revealed that Melsheimer had sought approval for his endeavor from the founders of the infamous pederast activist group, the North American Man/Boy Love Association (NAMBLA).

Today, B4U-Act continues to promote pedophilia as a legitimate sexual orientation or identity, and directly affirms that it does not seek to reduce or eliminate sexual attraction towards children or even encourage pedophiles to go to therapy. The organization also has campaigned to change and ultimately eliminate the Diagnostic and Statistics Manual (DSM) entry on pedophilia.

But Breslow’s disturbing history with pro-pedophile sentiment does not stop there.

In 2016, Breslow submitted his PhD thesis, in which he argued some kids are “queer.” This led to a later paper he published in 2020 titled “Flirting with the Islamic State: Queer Childhood with a Touch of Contemporary Sexual Politics.”

The article describes itself as “unpacking the sexual touch of the radicalized discourses of so-called grooming, it opens up new ways of understanding the relationship between childhood sexuality, sexual abuse, and contemporary sexual politics.”

Most recently, last year Breslow published a book titled “Ambivalent Childhoods: Speculative Futures and the Psychic Life of the Child.”

Breslow described the book as exploring “the queer life of children’s desires.” One chapter, titled “Desiring the Child,” opens with a description of a 12-year-old child dancing and mimicking sex acts to a crowd of adults.

“As his movements transition from those that mimic break-dancers to those that mimic sex acts, repeating the easily citational gesticulations of pelvic thrusts … I find myself caught up in exhilarating waves of memory, identification, and desire … a desire for him himself,” Breslow writes.

During an online launch of the book, Breslow stated: “What do we do when queerness is aligned with projects that are less easy to sit with that are less sort of respectable? … Is it really that children or young people having sex is the problem? Or is it [the problem] the conditions under which that sex happens?” Breslow also condemned the “carceral state” for its treatment of sex offenders, and echoed previous work he has done rejecting the need for the sex offender registry.

Breslow also cited as an inspiration for his own writing Judith Levine’s 2002 book Harmful To Minors: The Perils Of Protecting Children From Sex in which she wrote that “sex is not in itself harmful to minors” and argued for the lowering of the age of consent to twelve. One of her main sources for her book, Lawrence Allen Stanley, was a lawyer who had previously defended pro-pedophile organization the North American Man Boy Love Association (NAMBLA), and was arrested in 2002 for operating a website that featured and sold child sexual abuse materials.

In his book, Breslow explains that conceptualizing children as ‘transgender’ serves to normalize the notion of a gender identity. “The use of childhood innocence to reify gender identity establishes a strong claim to gendered selfhood,” Breslow states.

An academic colleague who praised Breslow’s work during the 2021 book launch, trans-identified male Julian Gill-Peterson, has written extensively about this topic.

Gill-Peterson, an Associate Professor at John Hopkins University, published Histories of the Transgender Child in 2018 with funding provided by the John Money Fellowship from the Kinsey Institute at Indiana University. Gill-Peterson’s book makes no mention of sexologist John Money’s recommendations that pornography be shown to children to establish their ‘gender identity,’ nor Money’s article published by pro-pedophile journal Paidika. Gill-Peterson argues in favor of “removing infantilizing instruments like the medical age of consent” in order to allow children to make “self-determined decisions”.

Notably, Breslow has levied harsh criticism against those who disagree with his views.

At the beginning of the year, Breslow gave a talk at the University of Cambridge titled “‘Sex is Real,’ and other Gender Critical Non Sequiturs: A TERF Grammar Book” wherein he denounced feminists who highlight the significance of biological sex in debates surrounding women’s rights.

Despite his history, Breslow became trustee for the children’s trans activist charity Mermaids at the end of July 2022, and had been acting in that role until today, when he resigned following public revelation of his past support for ostensibly pro-pedophilia narratives.

Mermaids is a UK registered charity which claims to support “transgender, nonbinary and gender-diverse children, young people, and their families.”

Established in 1995, Mermaids advocates for an affirmation-only approach to gender dysphoria in young people, and promotes the use of puberty blockers, cross sex hormones, and surgeries for minors.

In recent weeks, Mermaids came under fire after an undercover investigation found they were sending breast binders to teenage girls without parental knowledge. Due to a series of complaints following the report, the UK Charity Commission announced the were opening an investigation into the group’s status.

The investigation announcement comes on the heels of Mermaids launching a legal campaign to have the charity status of another UK charity revoked. Mermaids has been vehemently opposed to the charity status of LGB Alliance, an organization which has voiced its concerns about the medical transitioning of children. The case was first heard at tribunal in September and will resume later this year.

The current CEO of Mermaids is Susie Green, who many have accused of facilitating the unethical childhood transition of her own son.

Green has previously confessed that her now ex-husband had disciplined her son for playing with feminine toys as a child, and that the boy began identifying as a ‘girl’ after those toys were taken away from him.

Green took her son to America for cross-sex hormones when he was 13, facing legal obstacles in the United Kingdom. Dr. Norman Spack of the Boston Children’s Hospital placed Green’s son on an estrogen regimen to stop his growth. Shortly after, Green flew her son to Thailand for ‘gender affirming’ surgery.

According to the Times, Mermaids has stated they were ignorant of Breslow’s appearance at the B4U-Act conference prior to being approached by media, but it is unclear as to whether they were aware of his extensive academic history on the subject of child sexualization.

Since resigning from the Mermaids board, Breslow has deleted his social media accounts.