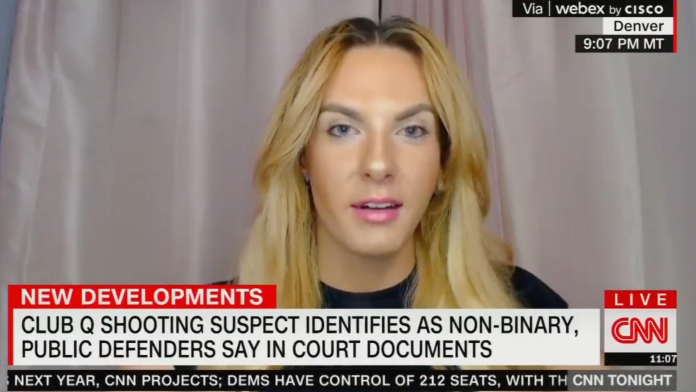 After it was revealed that a shooter who killed 5 people and injured 25 others at an LGBT nightclub in Colorado identifies as “non-binary” and uses gender neutral pronouns, trans activists took to social media to express disbelief over his self-declared identity.

Anderson Lee Aldrich, 22, opened fire at Club Q on November 19, tragically killing Raymond Green Vance, Kelly Loving, Daniel Aston, Derrick Rump and Ashley Paugh. At least 25 others in the venue were also injured during the incident. Aldrich was arrested at the scene and taken into police custody.

Following news of the mass killings, prominent figures blamed “homophobia” and “transphobia” for the shooting.

California Senator Scott Wiener, who introduced a bill that turns the state into a refuge for youth and parents of children seeking out puberty-halting drugs, went so far as to blame the shooting on the use of the word “groomer” online.

However, a recent court filing revealed that Aldrich identifies as a non-binary individual, and therefore could be considered a member of the LGBTQ community according to his chosen status.

On November 22, Aldrich’s legal team submitted court documents stating that their client prefers use they/them pronouns and goes by “Mx. Aldrich” as opposed to “Mr.” or “Ms.” Aldrich. The shooter also had legally changed his name shortly after his 16th birthday, and was born Nicholas Franklin Brink.

The revelation came after days of fierce online assertions over the shooters motivations, with many trans activists blaming both conservatives and gender critical feminists for the shooting. Some took aim at conservative commentators such as Matt Walsh and Tucker Carlson, with others even directing their ire at children’s author JK Rowling.

“Wow turns out I had never in my life experienced fury until the second I read the sentence ‘the shooter now claims he is non-binary,'” tweeted Gretchen Felker-Martin. Felker-Martin recently published a novel centered around trans-identified males graphically murdering feminists.

Some reporters even struggled to decide which pronouns to use for the shooter when reporting on the case. One CBS News clip showed reporter Karen Morfitt stumbling over her words as she attempted to use gender neutral pronouns for Aldrich, while CNN presenters speculated that Aldrich wasn’t really non-binary, but was instead setting up his defense case against the hate crime charges.

On November 23, Natalee Bingham, a friend of a Club Q victim, appeared on CNN to refute the shooter’s alleged gender identity.

When asked for comment on Aldrich’s “non-binary” identity, Bingham called it “ludicrous,” and claimed “it was obvious” Aldrich was a man based on his appearance.

“It was obvious with the mugshot that’s a man. That’s not a non-binary person because in no way shape or form could they appear as a woman the next day,” Bingham claimed.

Bingham called it “offensive” for a “male” to “play that role,” and reiterated that it was easy to tell Aldrich was not really what he claimed to be.

The clip of Bingham’s appearance began circulating on social media, and many users were quick to point out Bingham’s hypocrisy over not respecting Aldrich’s identity because of his appearance.

“But I thought we can’t tell anyone’s gender until they tell us? Aren’t we just supposed to believe what people say? Fairly sure Natalee is engaging in some double standards here,” one user said in response to the clip.

“Oh so it sounds like we don’t need to declare or recognize pronouns any more, we can just go by looks. Right?,” another user questioned.

I thought it was literal violence to not take someone’s word for it.

The narrative that Aldrich is claiming to be non-binary as a legal maneuver to secure leniency during the trial began circulating across social media shortly after news of the court filing broke. Many trans activists are now claiming that Aldrich is only pretending to be non-binary, citing evidence such as family members using he/him pronouns to describe him on social media.

Trans activist and alleged sex offender Eli Erlick repeatedly misgendered Aldrich on Twitter and claimed he is “playing the media by lying” about his gender identity.

“Using queer and trans self-determination ethos against us is a disgusting but effective way to further harm our communities.” Erlick stated on Twitter. In the past, Erlick has criticized those who accurately identify him as male, despite some anecdotal evidence that he leveraged his own self-declared transgender status to avoid criticism for alleged crimes he committed.

The debate amongst trans activists about Aldrich not being “authentically” non-binary are in contrast with long-standing assertion that trans activists claiming the only requirement to being “non-binary” is to self identify as such.

A viral tweet from September asserted that non-binary people “deserve to be respected without having their identity picked apart.”

Miller, known for his roles in The Flash and We Need to Talk About Kevin, became the subject of international outcry after numerous disturbing incidents came to light.

Miller is alleged to have committed multiple acts of violence against women, some of which were filmed and well-documented. In 2020, Miller was caught on video choking a female fan in Iceland and throwing her to the concrete. Earlier this year, Miller was reported to police by a Hawaiian woman who stated he had hit her in the head with a chair.

Most disturbingly, the mother of a young woman took to Twitter to report that her daughter had been effectively kidnapped by Miller, who had groomed her from when she was a minor, and plied her with illicit drugs.

Environmental activist Sara Jumping Eagle told her followers that her daughter, Tokata Iron Eyes, has not had a phone since January of this year, and that her family has been unable to locate her.

Yet despite all of his controversies, activists on Twitter asserted that Miller’s non-binary identity must be respected regardless of his improprieties. The actor uses the pronouns they/them/it and zir.

During the court proceedings, people on Twitter began posting about the importance of not misgendering Chandler, who identifies as both a woman and a lesbian.

In addition to those outright denying Aldrich’s identity, some claimed it was “suspicious” for him to have begun using they/them pronouns only after his arrest.

Trans activist and writer Katelyn Burns tweeted: “I just think it’s very convenient that the first time anyone on the planet has ever heard of you preferring they them pronouns is just after you’ve been arrested for shooting up a queer bar.”

But women’s rights advocates were quick to retort by pointing out that criminals identifying as transgender following an arrest, conviction, or incarceration was a relatively common occurrence.

Responding to Burns, one Twitter user wrote: “It’s almost like gender identity ideology allows males to do as they please and then claim trans status to avoid the repercussions. Most (transwomen) in Scottish jails only discovered they were trans after they were arrested. Funny that.”

Many pointed to a study published in the British Journal of Criminology which speculated that “the transitions of transgender people might be an attempt by pedophiles or other sex offenders to access cis-women in the female prison estate.” The same study found that a large percentage of men who identified as women in prison detransitioned upon release.

“So, the Colorado shooting suspect is identifying as ‘non-binary’ with ‘they/them’ pronouns. Many desperate for this inconvenient info to go away are claiming ‘they’ are just gaming the system. Possibly true. But haven’t gender critical women been warning about this for years?” tweeted podcaster Stephen Knight.

The motive for Aldrich’s horrific actions have still yet to be determined by official investigation, despite the array of online speculation. So far, it has been revealed that the shooter had a traumatic upbringing with both parents having criminal backgrounds.

Formal charges are to expected to be brought against Aldrich at his next court hearing, set for December 6.