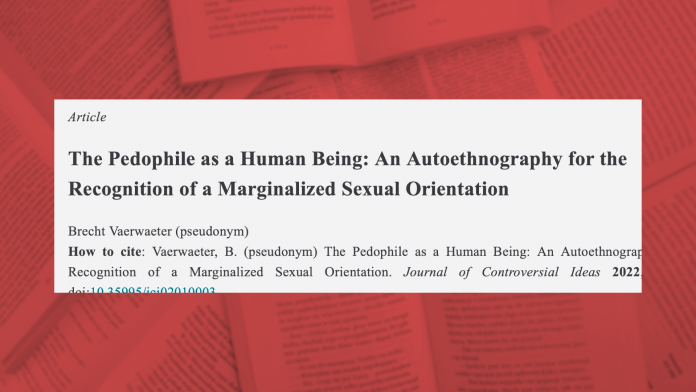 A scholarly journal edited by prominent academics published an entry from a self-admitted pedophile in their latest edition in what is now the second case of a pedophilic auto-ethnography finding its way into an academic publication this year.

Titled “The Pedophile as a Human Being: An Autoethnography for the Recognition of a Marginalized Sexual Orientation,” the article was published earlier this year in Controversial Ideas, an independent journal edited by three University-affiliated scholars, including Dr. Peter Singer, a Professor of BioEthics at Princeton. The editorial board is comprised of over three dozen academics, primarily Professors, at various prestigious Universities around the world.

The article was written by Brecht Vaerwaeter, an author who admits to publishing under a pseudonym for his protection. Vaerwaeter attempts to argue that pedophilia is a “marginalized sexual orientation” which required recognition, and that pedophiles must be turned into “human beings again” in the public perception.

Vaerwaeter begins by arguing that “many men, as well as some women, are attracted almost exclusively to minors” and that these desires result in feelings of isolation or abandonment. He goes on to denounce the lack of organizations that exist to support the rights of pedophiles, referring to political pro-pedophile organizations that existed in the 1970s, 80s, and 90s as examples of  groups “which often acted as part of the gay movement to promote the emancipation of pedophiles.” He later names examples in the North American Man-Boy Love Association, Vereniging Martijn, and Project Truth, all of which had member status in the International Gay and Lesbian Association (ILGA) until 1994.

After four sections asserting that pedophilia rights movements have a historical premise in the LGBT community, and lionizing champions of pedophile rights including Dutch politician Edward Brongersma, Vaerwaeter states he is going to offer his own auto-ethnographic accounts of being sexually attracted to children.

“The contribution to knowledge of this section is in providing primary evidence for the argument that being emotionally and sexually attracted to children or young teenagers is not fundamentally different from being attracted to adults of the opposite or same gender, and more specifically, that falling in love with a child or young teenager is not fundamentally different from falling in love with an adult,” he writes.

The article then shifts into the author recalling his sexual attraction to several young children throughout his life, describing his sexual fantasies about them, and sometimes describing the genitalia of the minors in graphic detail.

Vaerwaeter states he realized he had a sexual attraction to young boys at the age of 17.

“In the queue for the school canteen, my eyes drifted to the young kids who gathered in groups. During gym classes I enjoyed the smooth calves of the second-year boys.” Vaerwaeter says he specifically volunteered to supervise the young boys during a school retreat in order to have more interaction with them. He then describes becoming sexually infatuated with two boys who would have been 12-14 years of age, and fantasizing about boys of that age.

“I imagined that we were enjoying each other’s bodies, and in my fantasy for the boy it was a novel sensation over and over again, for which he then would be very grateful to me afterwards … it was clear that manually initiating a young, hormone-overflowing pubescent boy into the world of orgasm would certainly give me much greater satisfaction.”

Vaerwaeter recounts several more memories of meeting and engaging with young boys as he continued to get older, with multiple 12-14 year olds mentioned.

While recalling a young boy he supervised at camp named Cedric, Vaerwaeter writes: “Every night when I wanted to fall asleep, I would roll over on my left side, just as I had at that night at summer camp, and I would curl half around the imaginary sleeping figure of a warm, sweet, blond thirteen-year-old boy, put my arms around him, sniff his fresh scent and listen to his regular breathing until I would land in sweet dreams.”

On another boy, aged 14, Vaerwaeter says: “There was tension in the air from day one. When we went for a swim, Jeroen asked me if I wanted to rub his back with sun cream, after which he lay half naked against me. Someone took an unsolicited picture of us, we almost looked like a couple in love.”

Vaerwaeter eventually describes coming across boylover communities and reading about having a “light bulb moment” after reading in a boylover oriented magazine how “boylovers do not see themselves as child molesters, but as people who are attracted to young boys.”

He also states that “society should be more tolerant of those who suffer from pedophilic feelings,” asserting that such tolerance could prevent child sexual abuse.

Vaerwaeter’s article was initially published on April 29, which was just three days after now-disgraced Manchester PhD student Karl Andersson published his now-retracted auto-ethnography in the Journal of Qualitative Research.

The investigations were launched by both Manchester Police and the University of Manchester following a Reduxx investigation detailing disturbing facets of Andersson’s history, which included having published graphic magazines sexually objectifying real teen boys.

Like Vaerwaeter, Andersson treated pedophilia as a type of sexual orientation, specifically arguing that it was an “expression of homosexuality” during an interview with Out Magazine. Similarly, he also deferred to past acceptance of pedophile rights organizations within the early LGBT movement.

“The most controversial expression of homosexuality is when a man is attracted to an adolescent boy,” Andersson is quoted as saying, continuing: “the gay movement has lost touch with its past … It was founded to a large extent by men who were attracted to adolescent boys in Germany in the beginning of the 20th century. That should be acknowledged and it isn’t. We should honor them because we owe them our freedoms — instead, we despise them.”

As referenced by Vaerwaeter in his journal entry, in 1994, the International Lesbian and Gay Alliance was expelled from its consultative status with a United Nations body for having ties to multiple pro-pedophilia rights organizations including Vereniging Martijn and the North American Man-Boy Love Association (NAMBLA).

Two prominent members of Vereniging Martijn were recently arrested, one in Mexico and the other in Ecuador. One is alleged to have sexually abused “dozens” of vulnerable children, while the other had attempted to purchase a child and was found in possession of 4 terabytes (4000 GB) of child sexual abuse material at the time of his arrest. Both had advocated for tolerance towards pedophiles.