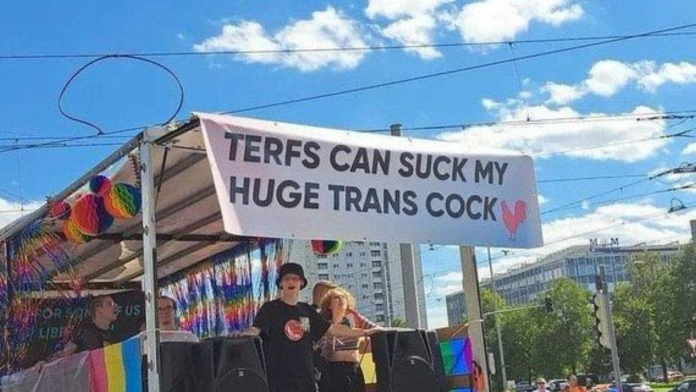 A 25-year-old female was murdered at a Pride Parade in Germany last week. The woman, who identified as a transgender man, was targeted after intervening in a lesbophobic attack.

On August 27, the victim, who has been identified only as “Malte C.” by the German press, witnessed a man verbally abusing two lesbian women and hurling lesbophobic slurs at them, including calling them “lesbian whores.” When Malte intervened to defend the women, the suspect punched her in the face several times, causing her to fall back. Malte was rushed to hospital and was placed in a medically-induced coma, but tragically passed away on September 2.

The suspect fled the scene and was initially described in German press “as a man between 18 and 20 years old, five foot six to five foot nine inches tall, with a slim frame. He was wearing flared jeans, a t-shirt, and a bucket hat.” On September 3, a suspect was arrested in connection with the attack.

The 20-year-old was identified as Nuradi A., a Russian citizen from Chechnya and former paperweight boxing champion. A. was in Germany on a refugee application, but the claim had been rejected and he was no longer permitted to be in the country. Notably, some have stated A. is alleged to be a homosexual himself.

On the day Malte C.’s death was announced, thousands attended a vigil. It is reported that 6,500 people took part in a rally denouncing violence towards queer people in Münster in front of the Historical Town Hall. Münster Mayor Markus Lewe (CDU) announced that he would put the flags on urban buildings on half-mast and apply the flag of mourning to the town hall. In addition, there is a book of condolence in the Bürgerhalle.

But the tragic killing was rapidly politicized as trans activists took to social media to blame C.’s death not on the man who killed her, but on “transphobia” perpetuated by feminists who assert women have a right to single-sex spaces.

Marie-Luise Volbrecht is a biologist who had her public lecture on the evolution of binary sex at Berlin’s Humboldt University cancelled due to protests by trans activists, and Alice Schwarzer is a prominent feminist figure and founder of EMMA magazine.

Alice Weidel is the leader of Alternative for Germany, a right-wing political party. While Weidel is a lesbian in a civil union, her party has been known to oppose same-sex marriage. Sahra Wagenknecht is a left-wing politician who has been called a “trans exclusionary radical feminist” for questioning her parties acceptance of identity politics and liberalism in her book Die Selbstgerechten.

Laubenburg wasn’t the only journalist on Twitter blaming women for the attack. Annika Brockschmidt similarly placed the blame on “journalists and politicians” who have “peddled the anti-trans moral panic,” following-up with an unsubstantiated claim that German TERFs were “celebrating” the murder of the transgender individual. Brockschmidt ended her three-part thread by stating “transphobia” killed Malte C., and suggesting that TERFs were responsible.

The anti-feminist rhetoric culminated in a large sign being displayed at the Dresden pride parade on September 3, reading “TERFS can suck my huge trans cock.”

TERFs got interesting offers today at the CSD in Dresden, Germany… pic.twitter.com/jdVbF9DWw0

This follows a wave of recent hostility towards gender critical women, particularly lesbians, during pride marches and events in Germany.

In August 2022, lesbians at a Dyke March in Hamburg were met with hostility, and at least one woman was physically assaulted by trans activists after asserting that men cannot identify as lesbians.

Similarly, in July, a group of lesbians comprised of members of LGB Alliance and Women’s Declaration International’s German branch were attacked by trans activists during a pride event in Cologne for holding banners with the definition of the word lesbian on them.

Speaking with Reduxx, Rona Duwe commented on the politicization of Malte C.’s death and how women are being blamed for the murder, noting she has since been targeted by trans activists due to her vocal stance on women’s sex-based rights.

Duwe is a German women’s rights advocate and author of Muttermut Mutterwut. Duwe has won an award for her work at phoenix-frauen.de, which focuses on supporting survivors of domestic violence, and discussing violence against mothers.

“Feminists have been held responsible for the act of a man in an unprecedented way,” Duwe says of the aftermath of the pride parade attack, “No one is naming the real problem: male violence.”

Duwe explains the German media have made feminists and lesbians out to be the instigators of the crime against Malte C., and says she is “very worried that this will exacerbate hostility towards women and lesbians” in Germany.

“Of all people, women, feminists and lesbians — those who fight for the safety of girls and women from male violence and risk a lot for it — are made out to be perpetrators.”

Duwe says that since Malte C.’s death, the German commissioner for the acceptance of sexual and gender diversity, Sven Lehmann, has called for more aggressive laws to penalize hostility against “queer” people, something Duwe says will inevitably result in the criminalization of feminists in Germany.

“They are sowing outrage against feminists who speak out on self-identification laws,” Duwe says. “The tragic death of Malte was weaponized in a frightening way by the media and politicians to advance legislative proposals which have been criticized by feminists.”

As an example of what she expects, Duwe points to the case of Christina Ellingsen, a Norwegian woman currently under criminal investigation for making comments asserting that males could not be lesbians. Ellingsen faces up to 3 years in prison if charged and found guilty.

“When women like Christina Ellingsen become criminals because they name material reality and demand sex-specific protections for women, you can see how laws to criminalize ‘queer hostility’ are really just about protecting men.”