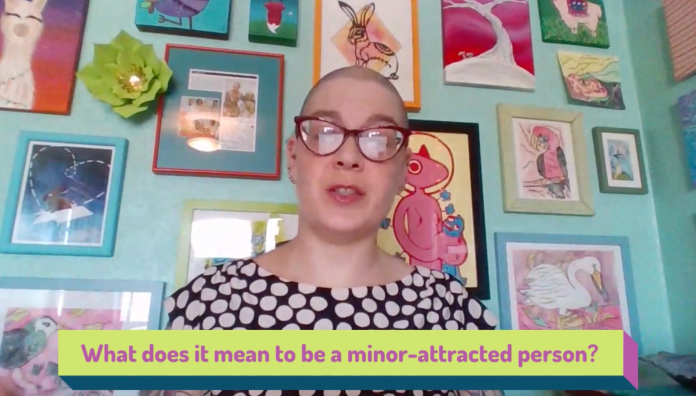 A licensed therapist who works with incarcerated sex offenders in the state of Pennsylvania is raising concerns after internet sleuths discovered she had defended pedophiles as a “marginalized” minority.

On July 24, licensed professional counselor Miranda Galbreath uploaded a video to her YouTube titled “Let’s talk about minor-attracted persons.” In the video, Galbreath attempts to frame pedophiles as “the most vilified population of folks” who suffer from “judgemental” assumptions of the wider population.

“The term pedophile has moved from being a diagnostic label to being a judgmental, hurtful insult that we hurl at people in order to harm them or slander them. I also like to use person-first language that recognizes that any label we apply to a person is only part of who they are.”

On her website, Galbreath states that she has been an active mental health counselor for over 20 years. She goes on to say that she is primarily actively providing “evaluation and treatment services in the community and within state prisons to folks who have committed sexual offenses.” On her Linkedin, she displays experience with the Pennsylvania Department of Corrections.

Galbreath provides a list of resources and link to other organizations on her website. Topics she has included are: “LGBTQ+”, “Kink and Poly,” “Youth / Teens,” and “Minor-Attracted Persons.”

In the latter category, Galbreath has suggested as educational resources various pro-pedophile lobbying groups. Among them is The Prostasia Foundation, a California-based 503c charity which markets itself as a pro-child safeguarding organization — a claim that has repeatedly been called into question by critics.

Prostasia has lobbied against child pornography bans, initiated letter-writing campaigns to state representatives demanding child-likeness sex dolls be kept legal, and crowd-funded for research into the viability of “fantasy sexual outlets” for pedophiles.

Earlier this year, Prostasia forced an academic journal to withdraw a research paper expressing criticism of their stances on child safeguarding, calling it defamatory. Titled A Case Study via Sociolinguistic Analysis of [a] Covert Pro-Pedophilia Organization Registered as a Child Protection Charity, the paper, written by Dr. Alaric Naudé of Suwon University, focused on how Prostasia claims to be for child safeguarding but builds a narrative framing pedophiles as victims of “an oppressive social structure.”

Recently, Prostasia began collaborating with an organization it calls the MAP Support Club, an unregistered group which claims to provide “peer support” for pedophiles, and invites “minor attracted people” aged 13 years old and up to participate in online chats about “minor attraction.” Prostasia also runs a Discord server which was recently exposed by internet sleuths for hosting disturbing, highly sexual communications in the presence of minors.

Another resource linked on Galbreath’s website is B4U-ACT, a registered non-profit based in Maryland which seeks to establish “communication between minor-attracted people and mental health professionals.”

B4U-ACT was founded by a convicted child rapist who explicitly stated the purpose of the organization was to advance the normalization of pedophilia. In the past, the group has pressured medical professionals to alter the classification of “pedophilia” in the fifth edition of the Diagnostic and Statistic Manual for Mental Disorders (DSM) in order to reduce stigma against child sexual abusers.

“The DSM criteria for pedophilia should assume and promote a collaborative, therapeutic relationship between doctor or therapist and patient,” states the B4U-ACT site. “In contrast, the currently proposed diagnostic criteria, based on offender data, assume and accept that the patient will be dishonest. Even the nomenclature of the client as ‘offender’ rather than ‘patient’ in the literature review clearly implies an adversarial relationship between the individual and the mental health professional.”

In an interview uploaded to YouTube on July 12, Galbreath discusses “sexual ecosystems” and attempts to humanize criminal sex offenders.

“We have an idea in our society about who these folks are that have committed sex offenses. We have words like ‘sexual deviant’, and ‘predator’ and ‘child molester’ and ‘rapist.’ They’re all really scary, judgey words. When you are actually in a room with these folks, they’re just regular people … The folks who commit sex offenses are just like the rest of us.”

Galbreath is a registered member of the World Professional Association for Transgender Health (WPATH), which sets international guidelines and protocols for the medical process of ‘transitioning’, including recommendations for minors.

In May, an investigation published by Reduxx revealed that members of a pedophilic child castration fetish forum had been involved with WPATH for over a decade, and were involved in the process of implementing the term “gender dysphoria” in medical nomenclature. Previously, the phrase “gender identity disorder” has been used. In addition, a term for a sexual obsession with genital mutilation – Skoptic syndrome – was removed from the DSM-5.

After the introduction of the term “gender dysphoria,” a diagnosis of “gender dysphoria in children” was added to the DSM-5, thereby paving the way for the promotion of drugs referred to as “puberty blockers.” These drugs, which are also used to chemically castrate sex offenders, were recently directly described as “chemical castration” by a Swedish physician at the Karolinska University Hospital, who strongly condemned their use in halting children’s puberty.

Galbreath’s videos first began circulating on social media this week after clips were posted by independent news researcher The Dalton Report. Quickly, many social media users took particular issue with her framing of pedophiles as a stigmatized minority.

Some users noted Galbreath’s perspective on pedophilia mirrored those of Allyn Walker, who came to widespread infamy in October of 2021 after utilizing the term “minor attracted people” to refer to pedophiles while on a podcast.

Walker, who identifies as non-binary, was an assistant professor of sociology and criminal justice at Old Dominion University in Norfolk, Virginia, and had interviewed with Prostasia’s now-defunct podcast to promote her book titled “A Long, Dark Shadow: Minor Attracted People and Their Pursuit of Dignity.”

Word of Walker’s interview with Prostasia spread like wildfire, with many expressing outrage that a University instructor was portraying pedophilia in a sympathetic light.  Copies of Walker’s PhD dissertation quickly began to circulate, showing Walker had entertained theories regarding allowing pedophiles to access “high quality child pornography” in belief it may reduce offending.

The backlash was so severe that Old Dominion University President Brian O. Hemphill was forced to issue a statement just days after the interview was released, and soon after placed Walker on administrative leave. On November 26, a joint statement issued by ODU announced that Walker was resigning from ODU. Walker was recently offered a fellowship at the Moore Center for the Prevention of Childhood Sexual Abuse.

While both Galbreath and Walker insist that “minor attracted people” by-and-large do not “act” on their attractions, multiple vocal pro-pedophilia advocates have been arrested this year alone on suspicion of sexually abusing children.

In June, two members of a Dutch coalition to destigmatize pedophilia were arrested, one in Mexico and one in Ecuador. Nelson Maatman, 27, and Marthijn Uittenbogaard, 50, are both facing charges related to the sexual exploitation of children. The two had been active members of groups which sought to change public attitudes towards “minor attraction.”