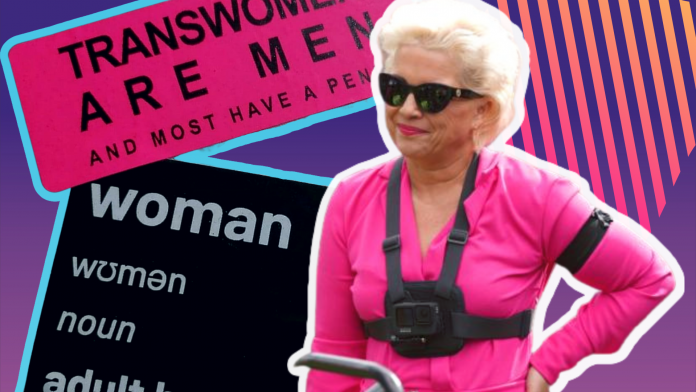 A popular British women’s rights campaigner is being threatened with arrest unless she attends a police interview to address an investigation into her committing a “hate crime.”

On November 21, Kellie-Jay Keen, also known by her moniker Posie Parker, posted a video on her social media channels titled “I’m going to be arrested.” In the video, Keen records herself returning a call from an officer with Sussex Police. The officer, PC Gammon, invited Keen to a Brighton police station for a voluntary interview due to allegations she committed a hate crime in September.

“The crime is use of words or behaviour to stir up hatred on the grounds of sexual orientation. It’s a voluntary interview so you can give your side of the story as well,” Gammon was heard telling Keen.

Keen asked the officer what the alleged hate crime was, but the officer did not provide specific information and instead stated it was in relation to Keen’s “Let Women Speak” event in Brighton on September 18.

Keen asked Gammon if police had reviewed any evidence which suggested she had committed a hate crime on the grounds of sexual orientation. The officer responded that they had cause to consider the allegation, and therefore had made the decision to invite her in for questioning.

Although Gammon initially claimed the interview was voluntary, she later suggested that if Keen did not attend they would inform her local police station to arrest her. Keen announced on social media that she had no intention of attending the interview.

As the founder of Standing For Women, Keen travels around the UK, and recently across the United States, hosting free speech events and encouraging women to voice their views on issues affecting them in relation to gender ideology.

Keen’s September 18 appearance in Brighton was at one such free speech event. Several hundred people attended, and, during the event, three counter protesters were arrested. Reduxx was onsite and captured footage of the arrests.

Another man, Craig Thomas, 50, was originally arrested on suspicion of sexual assault by touching. He has since been charged with assault and two counts of possession of a knife. No one on Keen’s side of the rally was arrested the day her alleged hate crime took place.

Keen has just recently returned from her tour in the United States At her last stop in New York City, at least nine people were arrested during protests that broke out in opposition to the Let Women Speak event. Keen was not able to appear at the event due to concerns for her safety.

Keen’s events are often heavily protested by trans activists and Antifa due to her strong advocacy for women’s sex-based rights. Although Keen has never been arrested at any of her free speech events, nor have any of her supporters, the call from Sussex police is not the first time Keen has been investigated.

In July 2022, two police officers visited Keen’s home claiming she had been “untoward about pedophiles” on her Youtube channel, and that this was being pursued as a hateful incident.

In 2018, Keen chose to attend a voluntary interview by the West Yorkshire police after being reported by Susie Green, the CEO of trans activist charity Mermaids.

Keen had commented on Green’s decision to take her then-teenage son to Thailand for sex reassignment surgery. Green’s son was 16-years-old at the time, and was ineligible in the United Kingdom due to his young age. Keen called the act “castration.”

Keen also noted that Green had “chemically castrated” her son, as the Mermaids CEO had taken her child to the USA for estrogen when he was just 13 years old. Green’s son had been a patient of Dr. Norman Spack at the Boston Children’s Hospital’s gender clinic.

On her YouTube channel, Keen recounted that Green reported her to police for her statements, who then approached Twitter to obtained her private information.

The police informed her during the interview that Green felt her tweets were “threatening.” The police criticized her use of the phrase “castration” and claimed “sex reassignment surgery” does not include castration. The police decided not to charge her following the interview. Authorities then passed the case over to the Crown Prosecution Service, which ultimately rejected it.

On her website, Keen issued a statement on this most recent police threat, writing “the words of women will not be silenced by a load of porn-sick men and their personal police force.”

Speaking to Reduxx, Iris, a women’s rights campaigner who facilitates Kellie-Jay Keen’s Twitter presence, said she was “not surprised” at this most recent threat from police, noting that Keen was an effective advocate and so was often a target for malicious activists.

“There are a few desperate to shut her down. It’s difficult to say which one in particular is responsible,” Iris says.

“I hope that by targeting Kellie-Jay it means other women with a lot more to lose will be left alone. In my opinion, free speech for women under gender ideology has plateaued so it’s not worse or any better for women at the moment. We are still being shut down on international platforms, such as EventBrite, but locally, police are doing their job and venues are starting to fight back.”

Sussex Police, the force which called Keen and threatened her with arrest, was recently the subject of ample mockery on social media after coming out in apparent defense of a transgender pedophile.

In September, Sussex Police was forced to issue an apology after scolding women on Twitter for misgendering a recently-sentenced serial pedophile. As Reduxx previously reported, John Robert Dixon was sentenced to a minimum of 12 years in prison following a conviction on 30 charges related to the sexual abuse of multiple children.

In a September 27 update on Dixon, Sussex Police referred to the predator as a “woman” and used feminine pronouns for him. Frustrated with the lack of accurate information, feminists took to Twitter to assert that Dixon was male, and that his crime should not be recorded as having been committed by a woman.